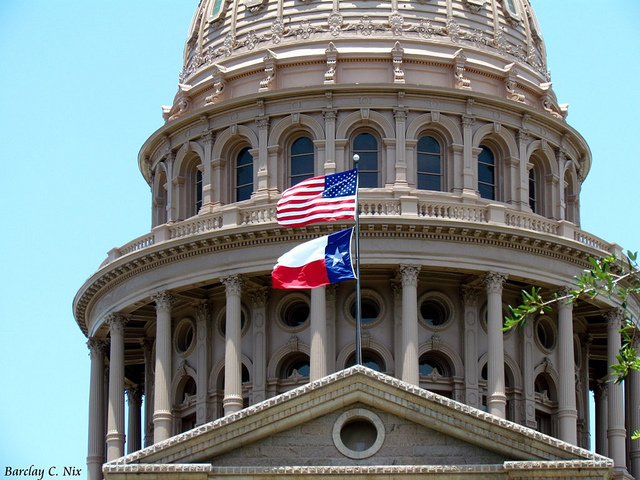 “Consistent” is not the first word one would use to describe the landscape of lobbying data released by municipalities. As revealed by our research, the formats and range of information local governments collect and disclose about lobbying activity varies quite a bit from one community context to another. After exploring the best practices for collecting and releasing this information, we created and recently published a Municipal Lobbying Data Guidebook. This guide addresses not only what kinds of information should be included in an ideal lobbying dataset but also information about how that data should be collected, shared, regulated, and examples of the impact of having this information made available in an open way (something we’ll continue to explore in future posts).

So how do municipalities measure up to these standards? We’re taking a close look at three cities — Austin, Chicago, and Philadelphia — to explore what they’re doing well and where their lobbying disclosure can improve.

Today, we turn to Austin.

Austin’s City Clerk oversees lobbying activity and reporting, sharing some related information with the public in an online portal page. The page includes downloadable template forms for lobbying registration, termination and quarterly activity. The city also posts online lists of registered lobbyists and their clients, along with address information and the nature of business for certain clients.

Downloading any of the template forms shows Austin requires several of the form fields recommended in by our Municipal Lobbying Data Guidebook. The registration form requires information about the lobbyist and their clients. The activity form requires information about the lobbyist and a breakdown of expenditures. (Any expenses less than $100 each can be aggregated.) Campaign finance reports are also linked to from the lobbying portal page. These reports require the name of the contributor, the amount contributed, and the date of the transaction.

II. What data is missing

Austin does not appear to require reports of (and therefore, doesn’t disclose online) information about which government officials lobbyists have contacted and what they have been contacted about. Information about expenditures, which is collected in the activity forms, is also not disclosed online. Requiring reporting of this activity and disclosing it online would help give more context to what lobbyists are working toward, more so than simply posting a list of their clients (as they do through the registration form disclosures). 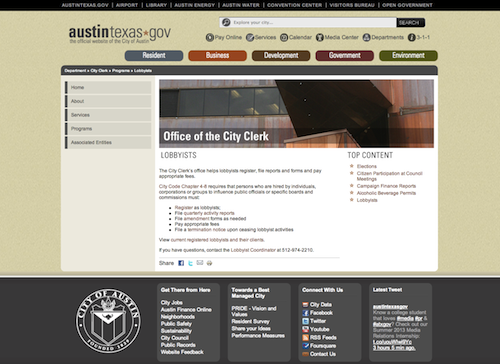 When it comes to how data is released, Austin has a tool that allows users to search its lobbyist database or browse complete lists that include the information disclosed in registration forms. These lists, though searchable, are not sortable or downloadable. If someone wanted to reuse the data, it would require more time and effort than if the data were made downloadable as a CSV or XML file, for instance.

Another data availability problem lies with the campaign finance reports. Since the electronic copies of these reports are just scanned versions of documents filled out by hand, the information on these documents is not machine-readable, so searching or reusing the data is difficult.

Austin could share the lobbying information it does collect in open, structured formats to improve transparency and lower barriers to use and reuse. Requiring electronic filing of lobbying information would be one way to ensure that these formats are easily generated and would help facilitate posting the information online.

By posting a link to the city code regulating lobbyists, Austin has done something that most cities haven’t. Linking to the city code and other demonstrations of the law regulating lobbying are simple steps a municipality can take to help better inform the public about what lobbying data is collected and how it might be available. It can also provide an opportunity to figure out which government official to contact with any questions or suggestions related to municipal lobbying. To that end, Austin also posts contact information for its Lobbyist Coordinator — a step other cities could follow to help the public better understand lobbying.