The real immigration fight is now about to begin.

As the Senate Judiciary Committee begins working on the Border Security, Economic Opportunity and Immigration Modernization Act of 2013, we still think the best field guide to the fight about to erupt over the 844-page bill remains our March 25 analysis, entitled “Untangling the webs of immigration lobbying” Here is the network analysis we produced back then (click for the interactive version): 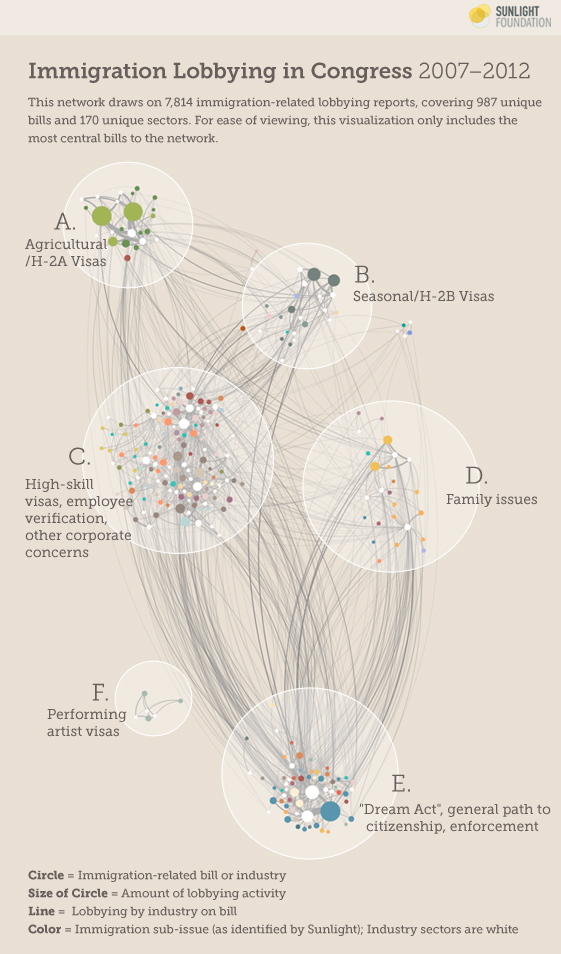 Click here for our interactive network guide to the most active interests, what issues they care about, and how intensely they are lobbying

Recently, news coverage has concentrated on the tech industry’s aggressive lobbying efforts to expand the high-skill visa program, including the entry of Facebook’s Mark Zuckerberg via a new organization called FWD.us. Back in April, my colleague Alexander Furnas explained how our analysis offered “useful clues into the provisions that FWD.us is likely to advocate for as it enters the influence game.”

But the new legislation ranges over a much broader range of issues. And if you wanted to predict which sections would take up the most pages, our initial analysis would have been a pretty good guide.

The two longest subtitles in the draft Senate bill – the 125-page Title III, Subtitle A on Employee Verification, and the 105-page Title II, Subtitle B on the Agricultural Worker Program – represent two of the most heavily-lobbied issues within immigration reform. To be sure, it’s hard to say whether the length of a subtitle is a reflection of lobbying interest, or the lobbying interest is a reflection of the complexity of the issue.

Below, we rank the 21 subtitles by total number of pages in the bill. Though this is an admittedly crude measure, these variable lengths can alert us to the relative complexity of these different issues and concerns. And an important part of the complexity in many cases is the need to reconcile the concerns of many different interests.

Table 1. Subtitles in the immigration bill, by number of pages

Now compare the above list to the list of issues that attracted the most lobbying reports from 2008-2012, when immigration reform was off the public agenda, but interested companies, associations, and advocacy groups were laying the framework.

(numbers for each sector represent bill mentions in that issue area)

Certainly, the categories do not match perfectly. But we can still make a few observations.

The Senate bill devotes the most ink to expansion of the E-verify system, which allows employers to verify the legal employment status of potential employees. In our original analysis, we found substantial interest in E-verify and general employer responsibility issues, led by the well-heeled Chamber of Commerce and the computer and software industries. The existing bill expands the E-verify system, a move that is supported by the U.S. Chamber of Commerce. However, civil libertarians have raised concern over this expansion, particularly its move into “photo-matching.”

The second most ink in the bill is devoted to the Agricultural Worker Program subtitle. This was one of the most heavily-lobbied immigration issues in the lead-up to the bill, and a dispute over the visa allowances between agricultural businesses and labor stalled legislation from moving forward for a little bit.  Questions over how and how many agricultural workers should be eligible for blue cards (which provide permanent residence after five years) continue to generate controversy. While it’s hard to know where the final compromise will wind up, what we can say is that between 2008 and 2012, the immigration sub-issue that appeared in the most lobbying reports was agricultural jobs, with milk & dairy producers and farm organizations being the most active sectors.

On the other end of the spectrum, reforming the H2-B seasonal visa program takes up only nine pages of the Senate bill, the least of any sub-title, and has generated little media attention. Over the years, however, the status of this program attracted substantial lobbying interest from a range of seasonal businesses.

If past is indeed prologue, seeing the resources that different sectors have historically devoted to different sub-issues within immigration can continue to offer a valuable guide to who will care about what in this round – and how much energy they are willing to devote to getting their way.