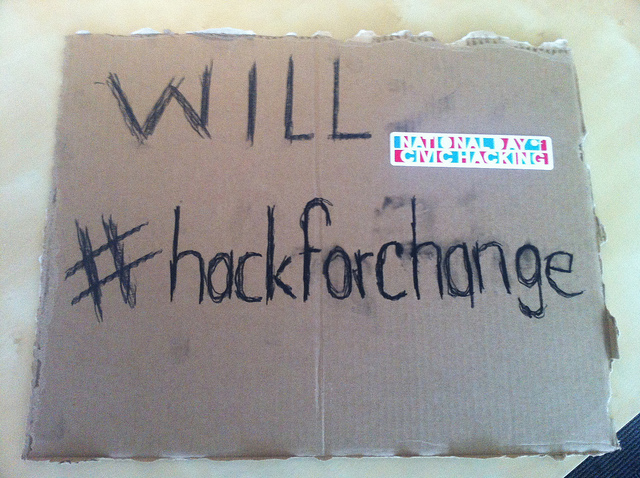 This past weekend, over 11,000 individuals connected under the helm of the National Day of Civic Hacking (NDoCH) — a series of local #HackForChange hackathons, unconferences, and meeting of the minds that engaged local communities with open data, code, and tech.

From what we can tell, the NDoCH events were magnetic, drawing together participation from local (and traveling) developers, government officials (including a few mayors!), community leaders, and even 21 federal agencies. The vibe of this national organization not only encouraged a sort of: “If you can’t hack with the city you reside in, hack with the one you’re physically located in,” but also further encouraged cross-pollination of civic applications from community to community. (For more highlights from the national scene, check out this Storify feed.)

Although Sunlight wasn’t able to attend every one of the 95 events held this past weekend, the events we did attend taught us quite a bit. Below, we’ve rounded up our reflections, recaps, and geeky highlights from the festivities in Baltimore, DC, Montgomery County, North Carolina, and Western Massachusetts. 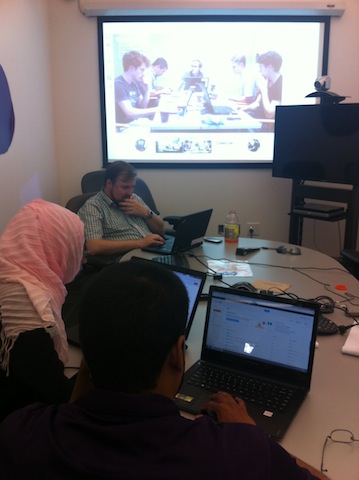 The #hackforchange event in Baltimore was very well attended, with participants coming from Johns Hopkins, the OpenGov Foundation, MICA, the Census Bureau and gb.tc (formerly know as Greater Baltimore Tech Council. There were ten projects in development at Hack Baltimore, so it was difficult to decide which would be awarded Sunlight’s prize for “Most Transparent” by guest judge (and Sunlighter) Bob Lannon. Ultimately, the prize was awarded to Shea Frederick’s baltimorevacants.org, which mashes up data about the location of vacant properties in Baltimore with quality of life indicators that were opened by the Baltimore Neighborhood Indicators Alliance (BNIA). A close runner-up was the Baltimore Decoded project, which is endeavoring to open Baltimore law in a machine-readable format at baltimorecode.org.

Hack for Change Baltimore also featured some good examples of inter-city hackathon collaboration, with many hangouts between the hackathons in Baltimore and Philadelphia. Winner of “Best Philly Fork” was Ryan J Smith’s fork of AxisPhilly’s AVI map, which shows the annual property taxes on lots in Baltimore. Sunlight’s Bob Lannon, former Philadelphian, also attended the event, working with Qais Feroz and Gaida Mahgoub on an update to the Sheltr project, which locates resources for homeless individuals. They worked in cooperation with a team in Philadelphia who was focused on building a Tropo interface to the Sheltr data, which will allow people to query for resources using SMS. 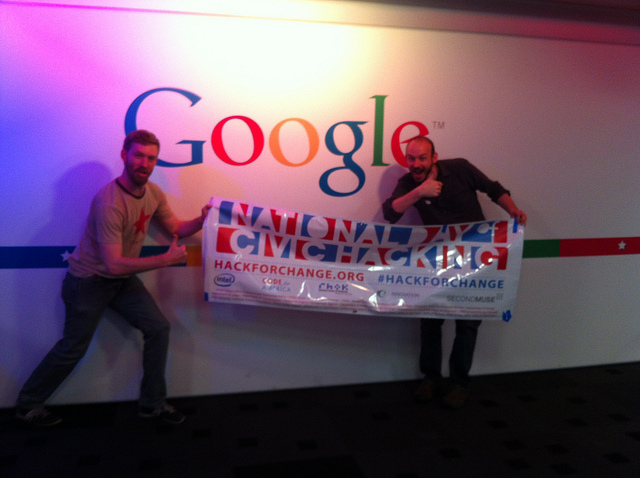 As a city(/state) that has a hard time drumming up wide interest in local open government issues, the overwhelming enthusiasm for Hack for DC was a welcome surprise — and one the organizers (the intrepid Greg Bloom, Justin Grimes, and Matt Bailey of Code for DC) managed to channel over three days of programming.

On Friday, members of DC government, Sunlight Foundation, and the local Code for America brigade got together in city hall for a two part session to set the tone of the weekend. This event included talks by David Zvenyach, DC’s General Counsel, and Sunlight’s Eric Mill and Laurenellen McCann. In the open discussion that followed, participants dug into the importance of structured data, the recent success of DC’s open legal code, and other pressing open data issues for the District — and even tossed around the idea of starting a working group to promote more dialogue with the city on these topics.

Delano was not the only DC staff member at Hack for DC. The staff of the DC Council also made a strong appearance. Leading the charge was David Zvenyach, the Council’s general counsel and the person responsible for releasing the DC Code into the digital public domain. Eric Mill of Sunlight’s Labs team showed up and worked with him and other Council staff to add more links between Code and Law in the unofficial DC Code browser – check the Credits section for § 3-101 to see some examples. David, in the meantime, personally hand-typed a new prototype XML format for DC statutes that has the potential to make DC legal information vastly more machine-processable, and ultimately more useful and understandable for DC citizens.  Other DC local projects worked on included Hacking DC Financial Data and the ANC Brigade Hackpad. To check out more information about all of the great projects worked on check of the Hack for DC projects page. 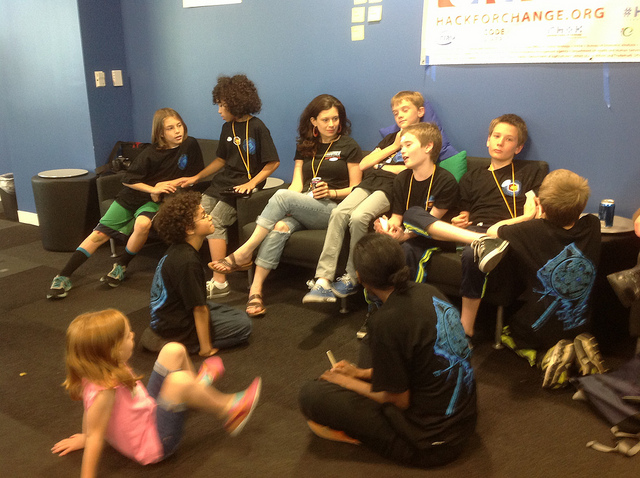 Of note, on top of the usual DC civic hacking suspects (members of the Code for DC brigade, employees of local open government advocacy organizations, and startup companies) Hack for DC also hosted surprise guest appearances by: current 2013 Code for America Fellows Moncef Belyamani and Laura Meixell, both of whom happened to be in D.C. for the weekend (working on the Open211 project and Affordable Housing App challenge, respectively), and Capitol Hill Montessori at Logan school GIS students who had given a geocoded food desert presentation earlier in the morning and convened in a circle for some Gov 2.0 mentorship. (Be sure to check out the great pics captured by Open Gov Champion, Sandra Moscoso: here.) The multigenerational presence didn’t end there: Student attendees from the District also contributed to the Homework Helper project.

Hack for DC participants were invited to continue work on their projects on Sunday at Affinity Lab, and in a brilliant open government act, were encouraged, if they did not already have civic hacking plans for their generously donated Amazon Web Services credits, to pool those credits to continue a Hack for DC project to liberate non-profit 990 forms and open up data never before available online, organized by Carl Malamud and Luke Rosiak.

While the Montgomery County #hackforchange event was of a more limited scope than others (Saturday evening only), it brought together people with a wide array of backgrounds and interests in civic hacking (including Sunlight’s Jeremy Carbaugh. The county government and other area groups presented five topic proposals for consideration by attendees. From these, three groups were formed to explore transit data, 311 improvements, and increasing coordination between food-focused businesses and charitable organizations that help the hungry. Each group identified areas of improvement and different technical solutions that could be used to achieve the goals.

The limited scope of the event prevented actual hacking or development, but seems to have increased participation among non-developers. Various interests were represented including local businesses, non-profit organizations, agencies of the federal government, and the average citizen. It was great to see so many varied, often non-technical, interests come together to collaborate on not only the underlying issues, but technical solutions as well. You can find Montgomery County’s data published on openMontgomery.

Hack for NC aka CityCampNC 2013 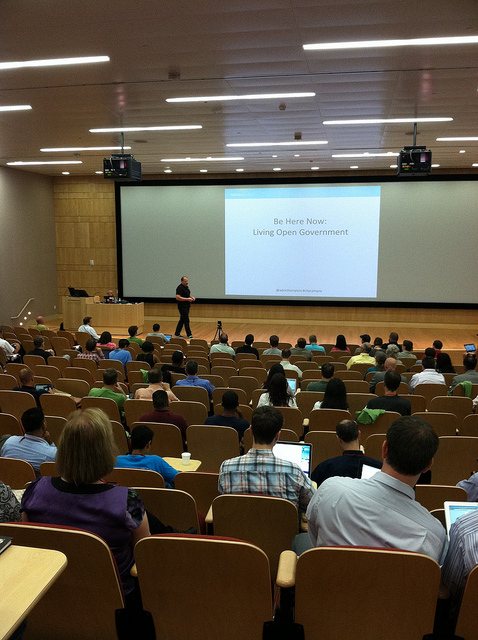 The National Day of Civic Hacking fortuitously fell on the day after the third annual CityCamp NC.  This led to quite a few participants coming to the hackathon with ideas formed during the preceding two days’ events.  There were also a number of groups that had formed earlier this year at the NC Data Jam.  James Turk, the lead of our Open States project and native North Carolinian was on hand and wound up lending his help to a team that was already using the Open States API for their project, InstaRep – a tool designed to make it very simple for NC citizens look up their legislator’s votes on controversial legislation.

The weekend was a great way to cap off an already successful CityCamp that spun off several new projects including the prize-winning Local Library team that spent time working on a better search interface to the County’s book catalog.  Other projects worked on in Raleigh included a TriangleWiki write-a-thon, work on a Raleigh Adopt-a-Shelter application, and a hardware hacking project involving energy monitoring sensors. 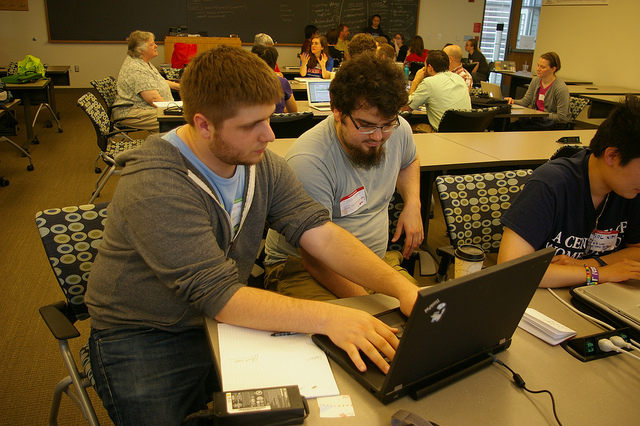 The well-attended Hack for Western Mass took place on Saturday and Sunday, with a few prepared challenges for participants. The weekend was filled with lots of mapping, with a small swat-team of OpenStreetMap hackers-for-hire that bounced from team to team, coming up with ways to get folks using OSM data. The participants were engaged on quite a few amazing projects, such as an effort to hack with Prison phone data, getting folks to bank locally, map out safety net services, supporting teen mothers, and setting up code to run a seed library. The bigger projects were focused on expanding Northampton’s notoriously expansive tree canopy, mapping out where private wells are (and help work out water quality), as well as a deep-dive into Federal spending in Amherst. All of the code is up on the event GitHub organization page, as well as a collection on storify.