Today, the U.S. Senate will consider the Comprehensive Immigration Reform bill and to mark the occasion, we put together a handy research guide on everything we have on immigration policy.

Follow the bill on Scout, and get updates on all immigration bills around the U.S., congressional speeches and more.

Check out an interactive timeline that covers 125 years of immigration policy and legislation in the United States.

Q: Who said “immigration reform” the most in Congress? 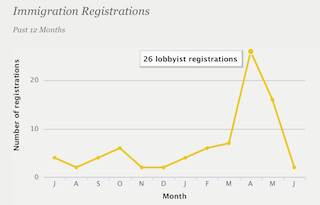 Since January, 61 people filed new registration forms, according to Sunlight’s Lobbying Tracker, with companies seeking more high-skilled foreign workers, led by the tech sector, driving the April and May uptick. This year already surpasses the 54 registrations from all of 2011 and 42 new reports from 2012 that reported immigration as an issue.

Last week, we reported that Federation for Americans for Immigration Reform (a.k.a FAIR) has spent at least $89,250 on TV buys in various markets this year, according to Political Ad Sleuth records. FAIR, which supports reduced immigration, began airing TV ads in early June in a number of states that are home to potential swing votes on the bill. View all the ad buys here. UPDATE: More on FAIR’s ad buys this month.

To see all our resources on the immigration issue, continue here on the blog or at the Sunlight Reporting Group.