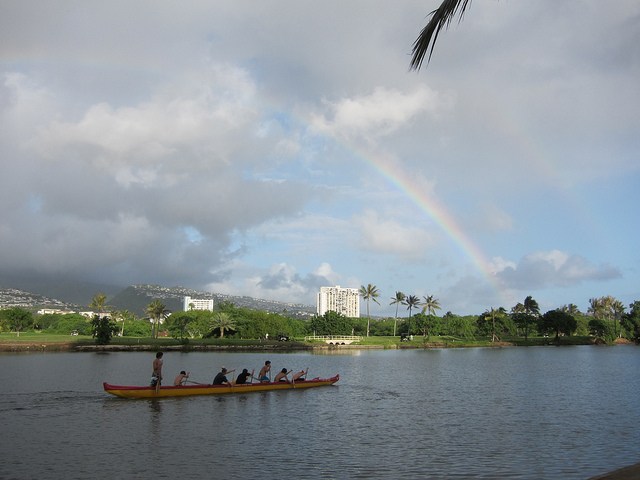 Hawaii Governor Neil Abercrombie is signing the nation’s third statewide open data policy into law today (at 11 a.m. HST/5 p.m. EST). The bill, Hawaii House Bill 632, was originally drafted in November 2012, but the open data movement in Hawaii and push for legislation has been chugging along for years now. Chief Information Officer Sonny Bhagowalia and Burt Lum, the executive director of Hawaii Open Data, crafted Hawaii’s Open Data Bill to support the data release that has been going on over the last year (via the city’s Socrata-hosted open data portal, currently boasting over 150 datasets) and in concurrence with a larger program that updates the state’s IT infrastructure.

Though two other state open data policies precede it (New Hampshire in 2009 and Utah, 2013), with a population of only 1.5 million, Hawaii looked to the city open data policies of Chicago, New York City, and Philadelphia when they started work crafting the original HB 632. HB 632 is short, resembling in size that  of Chicago and Philadelphia’s executive orders –- a bootstrap open data policy and a form of function built to easily support (and not disrupt) the data release initiatives already underway. But at the end of the day, Hawaii’s new legislation more closely resembles Utah’s law, which bolstered an oversight authority for data release (the Utah Transparency Advisory Board), than the IT-department empowering policies of Chicago, New York City, and Philadelphia.

The somewhat lengthy deliberative process over HB 632, from November until the signing today, provided an opportunity to see the iterative legislative process unfold with each bill iteration. (There were six total, two amendments by each chamber.) At the local level, where most open data policies reside in the United States today, it is often cumbersome or impossible to see an archive of the legislative process, which makes it hard to see where open data advocates and others wielding practical/privacy concerns have come to agreement (or not) and made compromises to finalize the legislation. While the amendment process of the 2013 Utah open data policy is easily trackable (and made more easily trackable by the launch of Open States in 2013, a Sunlight platform for searching legislative data from all 50 states), there was only one amendment round. The New Hampshire open data law of 2009 (which predates Open States’ tracking, but has left footsteps tracked by a local non-profit) had a similar amount of amendments and was equally kept short and simple.

Much can be inferred about the compromises legislators in Hawaii came to by examining the original “Relating to Open Data” measure and the final version. [PROTIP: using tools such as Superfastmatch and Juxta to compare bills is a quick and dirty way to see what ended up on the cutting room floor.] The original House Bill 632 was ambitious and called for a release of all data sets, quarterly progress reports on data release, a set of Data Set Rules created by the CIO/OIMT, and “automatically” updating data sets. In addition to language designed to protect privacy, it included provisions defining data to be anything considered a public record under HI’s Public Records Act (UIPA). As the bill was amended by both House and Senate, the Data Set Rules were nixed in favor of set of “policy and procedures” to be created by the CIO. Further, “automatically” updating data sets, releasing all possible data, and quarterly progress reports were explicitly removed, replaced with a softer requirement that the policy and procedures set include: “technical requirements with the goal of making data sets available to the greatest number of users and for the greatest number of applications, including whenever practicable, the use of machine readable, non-proprietary technical standards for web publishing”.

Other additions/revisions included adding introductory language to describe the open data movement, specific definitions of “data sets” (they went with final versions of statistical or factual information, non-narrative, created by or for the executive branch), additional liability measures, and highlighting the current Hawaii data portal as a repository (with a caveat that the CIO could change the site).

Overall, Hawaii’s legislation marks an important step forward for its local community. By creating a legal framework that both bolsters that data and advocacy that exists and leaves room for amendments to help this legislation grow and change in the future (as we’ve seen with San Francisco and at the federal level) Hawaii’s constructed a flexible, yet defined policy that’s well suited to its subject matter. As we write in our Open Data Policy Guidelines,

Just as publishing open data is an ongoing process that requires attention to its quality and upkeep (Provision 5), so too does the policy that establishes it. In order to keep up with the times, current best practices, and feedback from existing policy oversight, open data policies should be written in a way that makes them open to future revision. Open data policies should acknowledge that the context in which they operate is rapidly changing over time, and will likely need sustained attention to remain relevant.

Hawaii’s new law aims to do just that. (And even sets aside some modest funding to ensure implementation.)

As the third state in the US sets off on its open data journey, we’ll be keeping close watch. Follow along with us on the blog, or feel free to use Open States and Scout for your own state (and federal) bill watching. Interested in working on an open data policy for your community? Shoot us a note at local [at] sunlightfoundation.com for additional policy drafting tips and feedback.