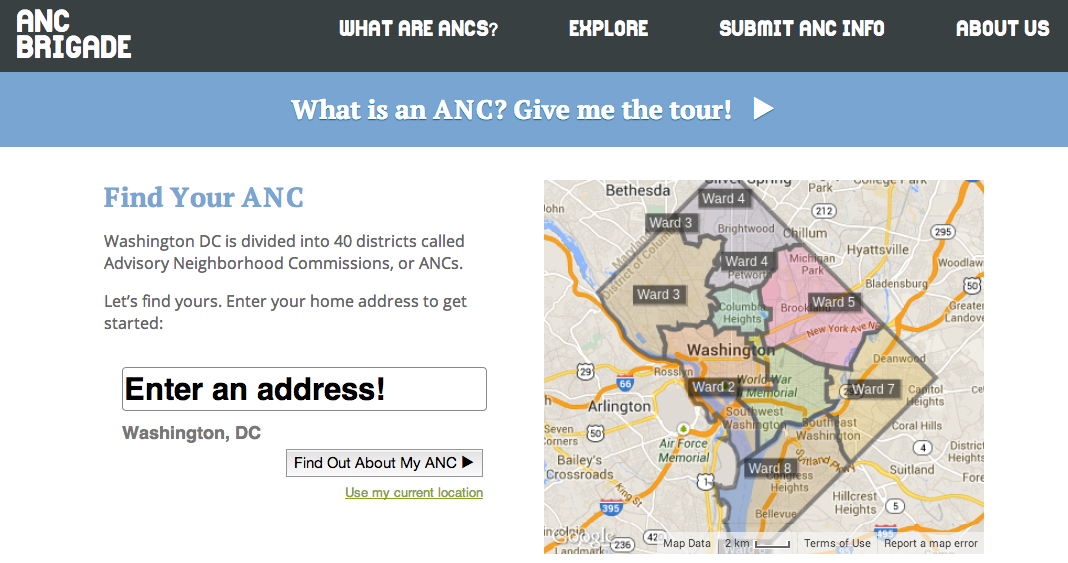 When we talk about providing a transparent and legible legislative process, the first step is identifying all the moving parts that contribute to the passing of law. In Washington, D.C., this means not just following the city council, but also following D.C.’s Advisory Neighborhood Commissions, or ANCs, the hyperlocal government entities that advise the city council on community issues. Although the District’s city government structure is uniquely granular, it serves as an excellent model for understanding what a complete legislative data framework should consist of.

Understanding D.C. local government is almost as complicated as understanding the federal government. Washington, D.C. is divided not only into 8 wards, but also into 40 ANC districts, and each ANC is further divided into many Single Member Districts or SMDs. Each ANC is made up of 2-12 commissioners (based on the number of SMDs in each ANC) that are regularly elected in small, nonpartisan elections. ANCs hold regular meetings, hear presentations, and commissioners vote on matters that affect the local community, such as: street improvements, parking, liquor licenses, zoning, restaurant and business issues, and trash and sanitation. Each ANC is also allotted a small budget, based on the population size of their district. While ANCs do not have city law making powers, their opinion is highly influential over city council decisions. In order to fully participate in D.C.’s government and to fully understand D.C.’s legislative process — let alone hold it accountable — one must have access to information about ANC commissioners, meetings, votes, and spending.

But, this hyperlocal government system is not always accessible to D.C. residents. Many are either not informed of its existence or find it impossible to look up information about when their next ANC meeting is, let alone the minutes or activities that take place during the meeting.

The local D.C. Code for America Brigade chapter, Code for DC, a volunteer group rallied around improving the civic experience with technology, took on exploring and improving how D.C. residents access their ANCs when they formed the ANC Brigade this spring. Prior to the creation of ANCBrigade.com, the project’s homepage (pictured above), the online visibility provided for by the District’s Office of Advisory Neighborhood Commissions and individual ANC websites (when they exist) was of widely varying quality, with some ANCs using listservs to dispense information, some using a default website provided for by the city government, and others spending money and time creating their own site. Moreover, the ANC Brigade found that the information presented on these websites was often inconsistent and out of date. For example, information about ANC meeting times and locations differed between the Office of Advisory Neighborhoods website and each individual ANC’s website. Meeting minutes and announcements were often not posted in a timely manner, let alone in an open format, and some ANC sites had not, in fact, been updated in several years, leaving inaccurate information in a prominent location. The level of inconsistent and missing information available was so prominent, it actually bottlenecked the creation of the ANC Brigade — and inspired a legislative solution.

Members of the ANC Brigade member, largely led by Brigade member Tree Martschink, took legislation to city council that would regulate and standardize ANC information capture from the District’s central government. On Tuesday, September 17, 2013, The Advisory Neighborhood Commissions Transparency Amendment Act of 2013 (B20-471) was introduced to D.C. council, and if passed, will prove a necessary first step in providing the complete legislative process picture in the District of Columbia. It’s an interesting picture of how bottom-up data advocacy can galvanize necessary top-down reforms, and one we’ll be curious to watch play out in D.C. and other similarly structured governments, such as counties and states, over time.

The text of what has been dubbed the “ANC Transparency Bill” by Code for DC members can be found here:

Of course, addressing the quality and consistency of ANC data is just one part of the puzzle. It’s also worth noting that the text for the ANC Transparency Amendment Act of 2013 took a week to appear via D.C.’s Legislative Information Systems (LIMS). While D.C.’s LIMS actually updates legislation information more quickly than the “daily” and “weekly” process Sunlight has seen in other states (which can see up to as much as 3 week compounded delays), and on a “regular” basis, meaning throughout the day and as close to real time as the system will allow, human (or system) delay can produce lags in upload time.

To follow the course of The Advisory Neighborhood Commissions Transparency Amendment Act of 2013 (B20-471), use Open States following feature, or Scout’s alert collection.