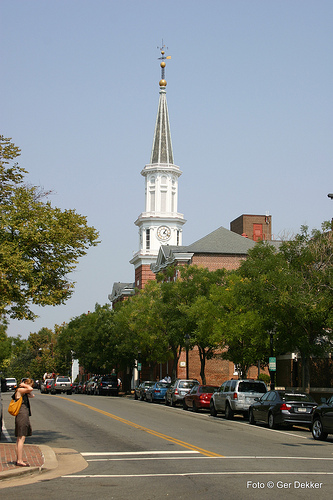 So, how do municipalities measure up to these standards? We’re taking a close look at three cities — Albuquerque, Alexandria, and Oakland — to explore what they are doing well and where their campaign finance disclosure can improve.

Yesterday, we looked at Albuquerque. Today, we turn to Alexandria, Virginia.

Alexandria shares its campaign finance information on a web portal with reports grouped by the office up for election (ranging from mayor and city council positions to the race for sheriff). Each of the links for specific races leads to a list of reports from those who ran for the office. Each of these lists include links to registration reports, independent expenditure reports, termination reports, and more for candidates.

Registration reports include candidate information, contact information, the date of registration, and banking information — the main fields recommended in our Guidebook. The data available in activity reports also meets the thresholds set by the Guidebook. The reports include the name of the individual or group that made the expenditure or contribution, the address of the individual or group, the date, how much was spent or received, the candidate or issue at stake and whether the money went to support or oppose it, and a description of expenditures (advertisement, handouts at the polls, etc.). Reports also include the name of the person who authorized an expenditure, and some have a State Board of Elections ID number, which can help track groups across forms. Some activity reports include starting and ending balances for reporting periods, too. Termination reports include most of the information found in registration reports, along with final disclosures of money that has been received or spent (including details like bank interest, any refunds, loan details, and more).

Alexandria seems to hit all of the marks for what campaign finance information should be disclosed from registration and activity reports. 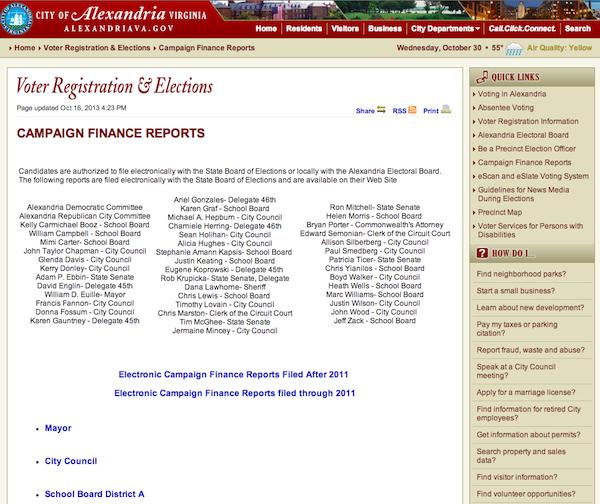 Alexandria has a bit of a unique situation when it comes to how it releases campaign finance data: some campaign finance disclosures are accessible on the city’s website, while others are available from the state’s website. This variance appears to come from candidates being allowed to “file electronically with the State Board of Elections or locally with the Alexandria Electoral Board,” as the city’s portal notes. The city’s website also makes note of which reports can be found on the state’s website, which is helpful since there are no direct links available to local candidate information on the state website. Users have to run searches for the information there.

The documents on the city’s website are a mix of PDFs with different levels of searchability. Some are scanned documents that are only partially searchable or provide no searchability, while others are fully searchable. In the partially-searchable PDFs, the actual information filed by candidates and groups often makes up the sections that are not searchable, because they are handwritten. This makes it even more difficult to reuse the data, because it would have to be manually entered into a new system to do anything with it.

Reports filed with the Virginia State Board of Elections meet more Guidebook standards for how data should be made available — helped in part by the reports being electronically filed. The newest state website for e-filing (there is one for pre-2011 e-filing and a newer one since then) allows for searches of local information or browsing reports, and it provides the option of viewing data in an online table (that isn’t sortable, unfortunately). From the tables, users can download reports as fully-searchable PDF or XML files. They can also view a list of data definitions for the XML files.

Alexandria’s release of campaign finance data could improve significantly if it required e-filing, which would help empower the kind of open data available on the State Board of Elections website. The city could even take a step further by sharing information from these documents online in a way that is sortable, in addition to being searchable and downloadable. Bulk downloads would also be easier with e-filing, as would real-time updates of the information.

Context information about campaign finance disclosure is hard to find on Alexandria’s portal. Linking to the city code and any other regulations (at the state or local level) that impact campaign finance could help provide important context about how the system works. The city could also specifically provide information about thresholds for registering, filing requirements, contribution limits or prohibitions, and filing schedules to shine a light on what information is available and when — along with anything that might not be reported.