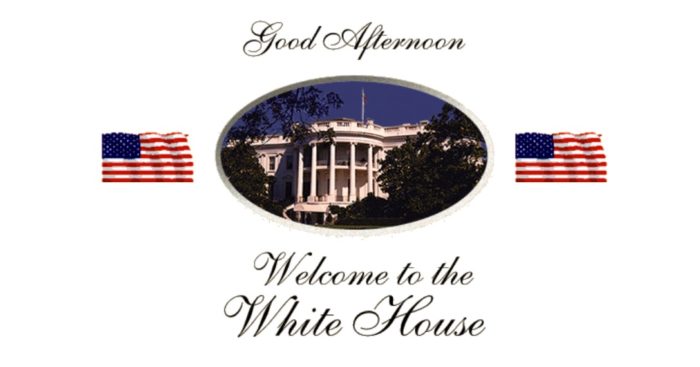 Every new administration has put its own spin on Whitehouse.gov since the website first went online way back in the 1990s. 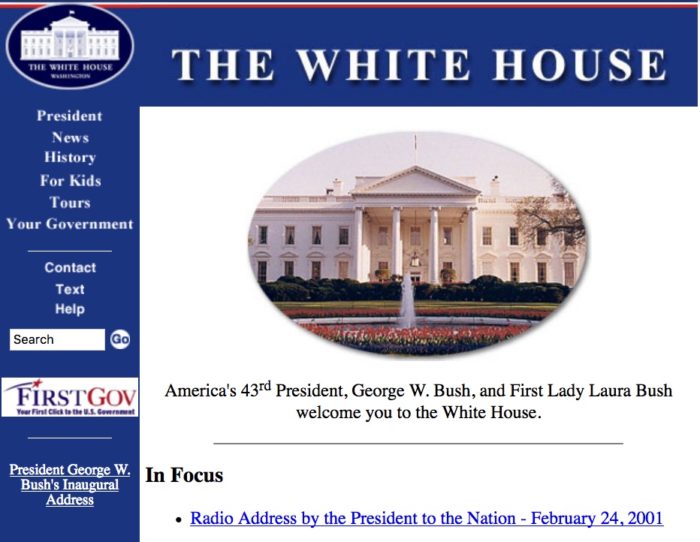 When a new President swings in, an archived version of the old site maintained by the National Archives and Records Administration remains online, but the incoming administration takes over the domain. 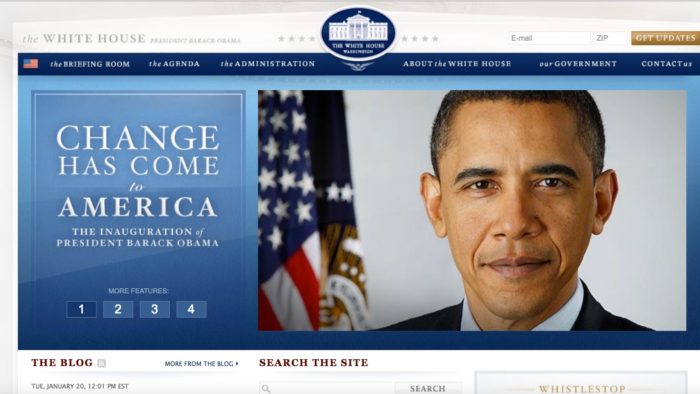 President Donald Trump’s transition team decided to stick with the same design developed by his predecessor, but fill it with information about his administration and its policy priorities, which are — unsurprisingly — pretty different from those espoused on the Obama administration-era version of the site. 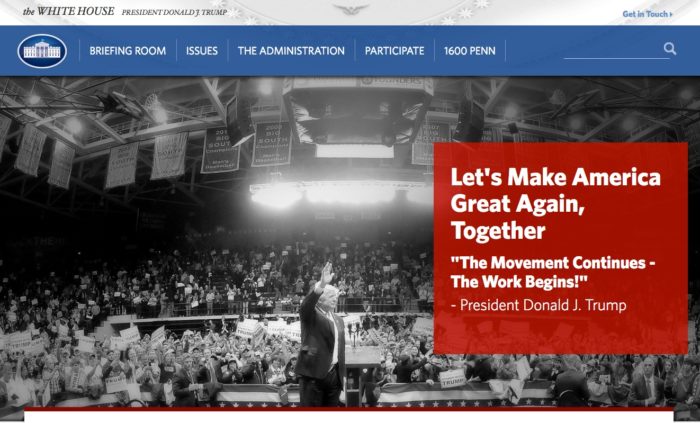 But the Trump team did make at least one pretty shocking change to Whitehouse.gov: they appear to have banished some basic information about how the government works from the site — including the White House Open Government Initiative.

Here’s one striking example: the entire section of the White House website devoted to the Office of Management and Budget was digitally wiped off the map. Trying to find OMB’s homepage now returns a page unavailable message urging visitors to “stay tuned” as the administration continues to update the website. Trying to navigate to the site via budget.gov re-directs to the same error message. 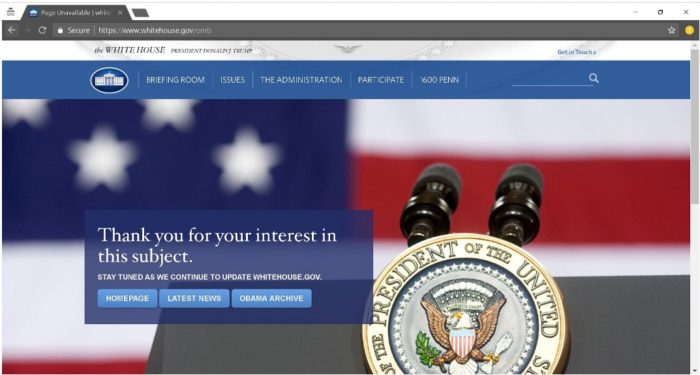 That’s a big deal because OMB isn’t some minor part of the White House universe — it’s traditionally the largest entity within the Executive Office of the President. While OMB’s most prominent job is helping the President develop a budget, it also issues memorandums that advise federal agencies on how to carry out their roles in compliance with administration policies.

Those memos provide key insights into how the government functioned in the past and still functions today. But when the Trump administration took the digital reins on January 20th, a digital archive of select memos going back to 1995 was removed from the White House website, along with everything else related to OMB other than two scant mentions on a page generally outlining the Executive Branch.

This is a massive departure from how information about the office was handled over the past eight years. OMB’s online home was available via Obama’s version of Whitehouse.gov from the first day of his presidency, as shown by snapshots collected by the Internet Archive. Archives from near the beginning of President George W. Bush’s first term suggest his office also preserved a place for OMB when he took over the site, even though the Internet wasn’t yet the juggernaut it became by the time Obama took over.

To be fair to Trump’s digital transition team, it’s not clear if they actually meant to erase OMB’s primary digital presence. The White House press team did not respond to an inquiry about if the office’s pages were removed on purpose and if the administration has plans to restore the information. The evidence available so far suggests that Trump’s digital team wasn’t equipped to handle the basics of transitioning the White House website — leaving open the possibility that they just didn’t realize they left out something important.

For one thing, the site launched without a Spanish-language version and the related Twitter account — @LaCasaBlanca — has been silent since the inauguration. The transcripts of the three press briefings aren’t up: there is only the statement delivered by the Press Secretary on January 21st. Archived video of the briefings are available on the White House YouTube channel, as you can see below.

Some features of the new Whitehouse.gov also have problems. Take the email button that appears on the Press Briefing page and some other places throughout the site, for example: clicking it turns up a “page unavailable” message rather than offering a way to sign up for email updates. (Sunlight asked a White House press secretary directly to add us to this list. We did not receive confirmation.) Broken jump links on the Executive Branch section, meant to help users more easily navigate to different parts of the page, suffer from the same problem.

The White House “We the People” epetition platform remains live but there’s no associated Twitter account or comms channel. User accounts for the site also appear to have been deleted and new users have reported problems signing new petitions.

That last part isn’t necessarily a problem on its own– after all, why fix something that isn’t broken? But in the first few days of Trumps’ presidency, the administration seemed to have a hard time disclosing information about presidential actions online to the public in a timely manner. For example, although President Trump signed two executive orders on his first day in office, it took until January 23rd for even one of them to be published on Whitehouse.gov.

Things had improved as of Wednesday evening — by that point information about two executive orders and eight memoranda were up — but the fact that they appear to have launched without a process for making basic online updates does not inspire confidence.  And — as the OMB example shows — the Trump transition team didn’t prioritize keeping non-political content that provides important transparency about government operations online when they inherited Whitehouse.gov. Besides OMB, pages for the President’s Council of Economic Advisers and the Office of Science and Technology Policy (OSTP) also do not appear to exist — meaning there’s no real public record of who, if anyone, actually works on those teams or is leading them now.

Some of those decisions have broken incoming links from external government sites — such as those that relied on the OMB memo archive — and the broader World Wide Web, causing disruptions that ripple out beyond just Whitehouse.gov.

All of those hiccups point to a new administration that wasn’t prepared to digitally hit the ground running.

That said, the Trump administration reportedly does have plans to give Whitehouse.gov a facelift  —  eventually. Ory Rinat, who provided digital strategy advice to Trump’s transition team, recently told Politico that the redesign in the works will take months because the team “wanted to make sure this was done right and with the people who are going to be running the website involved.”

Getting the redesign “done right” will means returning things like the OMB memos purged from Whitehouse.gov in the initial digital transition online and either using the previous URLs or setting up redirects.

If it doesn’t, the good news is that the information is still available elsewhere through online caches and archives, perhaps most easily through the National Archives and Records Administration’s archive of Obama’s version of Whitehouse.gov.

The bad news is that the Trump administration started its digital tenure by making it much harder for average citizens to find information about how our government actually works directly from the source. That’s a major step back for transparency.

It’s a series of decisions that are stark against the background of how the Trump administration is approaching communications and disclosure of actions with the public so far. The White House and President of the United States are making claims that are baseless or easily proven false. Transition officials have issued directives for media blackouts to federal agencies, only for the Press Secretary to deny them to reporters after the directives have already been publicly confirmed by transition officials and disavowed or clarified by agencies.

The Internet has an amazing capacity to open up governments to their citizens. Modern technology enables transparency, accountability, participation and engagement that was impossible before every connected person could look up information with just a few keystrokes or taps. Every administration in the Internet-era has taken some steps to expand the government’s engagement with the digital world, building on the progress of their predecessors.

Continued progress in open government in the United States depends on having an administration with both the political will and the technical ability to not only be good stewards of platforms, processes and policies that make our government more accessible and accountable to the public. Judging by the Trump’s version of Whitehouse.gov to date, it’s unclear whether the new administration has either.