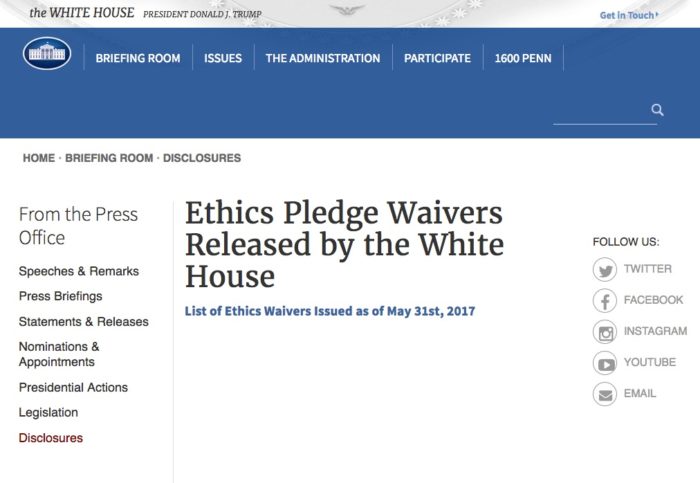 The White House publicly disclosing the ethics waivers online tonight on its website was a step in the right direction. This action will help to reassure the public that there is in fact some basic level of ethics oversight happening, despite President Trump’s refusal to abide by the same basic ethical standards that apply to the rest of the federal government.

The timing and form of release of the itself, however, is emblematic of the administration’s approach to transparency and accountability in general. Instead of posting ethics waivers from the outset in January 2017 on WhiteHouse.gov, the Trump administration has quietly disclosed a document months later. It only happened after massive outcry followed reporting of secret waivers, followed by a data call from the Office of Government Ethics (OGE) and then an unprecedented questioning of OGE’s legal right to ask for waivers that should already been public by the White House Office of Management and Budget Director.

To release a PDF like this is not precisely opacity by form or format — but it’s not machine-readable either, under the 2013 executive order that remains in force. It is not at all the same thing as posting text of the waivers on the Web page, in terms of the ease of public access. Thanks to Washington Post reporter Steven Rich, however, the public and media can access a simple table in the CSV format. 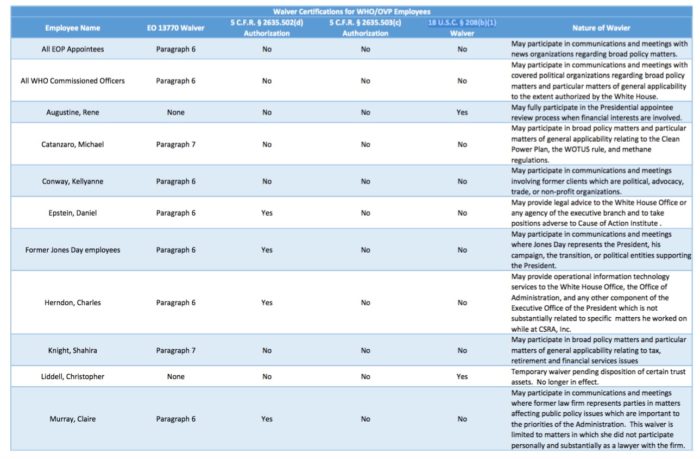 All that aside, this act represents a return to an important norm and disclosure standard, with waivers posted to a public page on the White House website.

What’s unclear to is where or when the secret waivers will be disclosed for the agencies. Until they do, though, that’s a promise that’s in question.

What’s is clear for now is that the Trump administration has given out approximately as many ethics waivers (17) in 4 months as the Obama administration gave out in 8 years.

Most importantly, the White House is allowing former lobbyists to handle the same topics they had lobbied on in the private sector, as reported by the New York Times and Washington Post.

Getting these waivers posted online is a precondition for Americans to judge whether the White House is policing their own ethics. We know they are not where it counts the most — the President of the United States — but this is a meaningful window nonetheless.

Now that these waivers have been disclosed, the public, the press and the Office of Government Ethics can evaluate their appropriateness and relevance to the public’s business being done by White House officials.