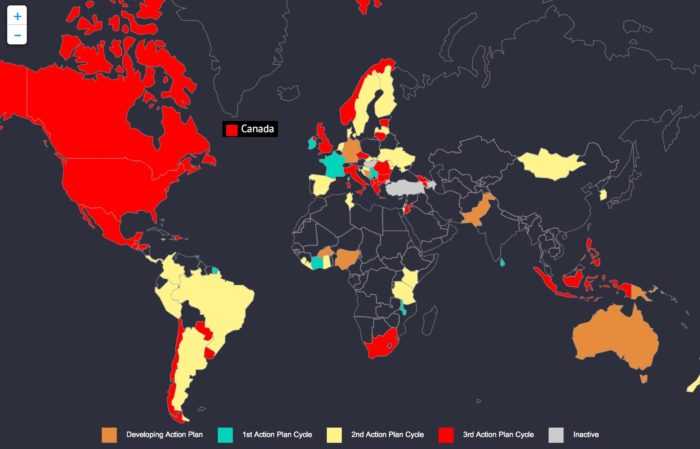 The big idea behind the Open Government Partnership’s founding in 2011 was that it would provide a platform for the public to hold a national government accountable for meeting commitments that have been created in open consultation between the governed and a government of the people. When countries elect leaders like President Donald J. Trump who don’t value basic democratic norms for accountability, transparency and ethics, it poses a stern test: can a voluntary mechanism between community of democracies be used to protect and defend it?

On Wednesday morning, the Trump administration formally introduced a draft framework for the Fourth United States National Action Plan for Open Government at a public meeting in the General Services Administration (GSA) in Washington. The public will now have just under a month to propose commitments and provide feedback on proposals by commenting on a GitHub or emailing nap4@gsa.gov. Today, the GSA’s Emerging Citizen Technology program will host an invitation-only collaborative workshop on “Emerging Technology and Open Data for a More Open Government” that will “tap into U.S. private sector and federal IT modernization efforts to help ensure that the federal government leads in public service innovations designed by and for citizens.” Our deputy director will be there to represent Sunlight and will share what he learns, as with the White House roundtable on open data.

The new plan is required under the terms of countries’ participation in the Open Government Partnership, the voluntary multi-stakeholder initiative that the U.S. launched alongside other national partners to both fanfare and skepticism in 2011. The last three plans and self-assessments are available at open.usa.gov, the website the GSA created after the Trump White House didn’t create whitehouse.go/open in January. While the Obama administration’s record on open government is mixed, most of the list of advances and reforms it touted last December remains, ironically, largely unknown to the broader American public. Reports by independent researchers reviewing progress — or the lack thereof — towards national commitments are available at OpenGovernmentPartnership.org.

What does OGP mean?

Globally, the Open Government Partnership has given the public an important window into the work of the civil servants that implement government programs, and a voice in proposing national commitments for openness and accountability.

Under President Obama, who used accountability and transparency as the basic themes in his thinking on public service, Sunlight saw OGP primarily as a civil service victory, and a Presidential disappointment:

“…if we imagine what a National Action Plan could be with a committed, engaged President, and senior political staff at the White House who discuss and engage with integrity issues, rather than treating them as political liabilities, we imagine a wholly different world. Incremental working groups and vaguely redundant reporting procedures would be replaced by bold proposals that affect political and state power, and we’d see a White House that talks more about the transparency we’re building than the transparency they use as a shield against critics.”

Of course, the integrity of the partnership depends upon the capacity and integrity of a national government to not only make commitments in good faith but carry through on them.

In a normal year, the short timeline for public participation and co-creation of this fourth plan would be cause for concern. Meaningful consultations on a national open government plans under OGP are measured in months and generally feature broad outreach using online and offline forums.

The White House has proposed a series of initial commitments that primarily reflect the administration’s interest in modernizing government technology. Commitments like “Harness the Data Revolution for Business and Jobs” or “Healthcare and Veterans Services Modernization” have merit and value, but their relevance to good governance is debatable.

Protecting and defending government transparency, accountability and ethics in our union in 2017 often involves technology, as do many programs and initiatives, but it cannot and must not stop there.

In 2017, the substance of the framework and the Trump administration’s clouded record on open government both call into serious question the legitimacy not only of the process, which is generally led by mid-level government officials, but also participation in the Open Government Partnership by the United States. Can an administration’s participation in a voluntary, public consultation-driven reform process lead to valuable results, when the President’s commitments on related accountability issues have so clearly been offered in bad faith?

What is the value of participation?

In evaluating whether the US government should even attempt to continue to participate in the Open Government Partnership, we have, on one hand, the value in giving senior officials from agencies fora to advance their valuable work, which has continued in many agencies. Across the federal government, dedicated civil servants are upholding their oath to the Constitution, working on behalf of the public. We will not denigrate them or their efforts to continue making a government of the people a reality. The American public should be proud of 18F’s progress on a national Freedom of Information Act website and the implementation of the DATA Act by the Treasury Department.

There’s also value in the United States continue to commit to such an important, fundamental value in a public way, at a time when other countries’ commitments are wavering and the spread of democracy globally has stalled. This is similar to arguments for the U.S. to remain in the Paris Agreement for climate change, a similarly voluntary, commitment-led multi-stakeholder initiatives, despite the Trump administration’s generally regressive, anti-science views.

On the other hand, the opportunity to use OGP as a lever for commitments to address ongoing issues with ethics or disclosure must be weighed against the risk of this administration exploiting public consultation for political cover, making false or unrelated commitments, or wasting time by domestic good government organizations and advocates left skeptical and disappointed by the last consultation.

In many substantive ways, the U.S. has already broken past open government commitments to OGP, like rolling back an SEC rule that mandated disclosure of payments to governments by oil, gas and mineral companies.

Last December, the United States signed on to the Paris Declaration, committing, among other things, to “protect, consistent with international law, freedom of expression, including for the press and all media, defend the role of journalism as a crucial force for transparency and accountability, and stand up against attacks and detention of journalists.”

In 2017, we’ve heard a President of the United States tell the public that journalists are the “enemy of the people” and decry their journalism as “fake news.” Reconciling a president adopting an autocrat’s rhetoric and strategy of delegitimizing journalism with national commitments to open government has put our civil servants and diplomats in a difficult position, both foreign and domestically.

Beyond that conundrum, this consultation process will be overshadowed by the ongoing appearance of corruption at the White House, renewed secrecy in agencies, and antipathy towards the essential role of journalism in a democracy by the President, among others.

We encourage the American public to review the Trump administration’s record on open government and then propose commitments that would make a substantial difference in public corruption, ethics, disclosure, and, perhaps above all, trust in government.

Sunlight will be making our own suggestions, from press freedom to passing open government reforms in Congress. We will continue to call for the Trump administration to take the urgent steps necessary to restore basic respect for ethics in government, press freedom, and integrity in public service, and to encourage progress on important questions of scientific integrity, overclassification, trust in government, or other priorities expressed by the public into the plan, despite this White House’s demonstrated antagonism towards many of these issues.

It remains an option for US civil society groups to take the kind of collective action that our friends and allies did in Mexico, and refuse to lend our imprimatur to any kind of participatory theater, if that’s the direction the initiative takes.

It’s fair to acknowledge that we don’t enter the process with a tremendous deal of optimism. Sunlight is now running the @OpenGov Twitter account to share federal open government initiative events and news with the public, after the White House abandoned it. The Trump administration has yet to discuss open government from White House accounts, respond to our questions about the issue or acknowledge the impact of its information policies on public trust or understanding.

From tax reform to foreign affairs, the Trump White House has lost the ability to make reliable commitments on substantive policy altogether, as near-constant contradiction and disinformation from the President himself render all White House policies tentative and temporary, eroding the trust of the nation’s allies and strengthening the hands of autocrats who thrive in post-truth environments.

It’s up to all of us to protect and defend it.