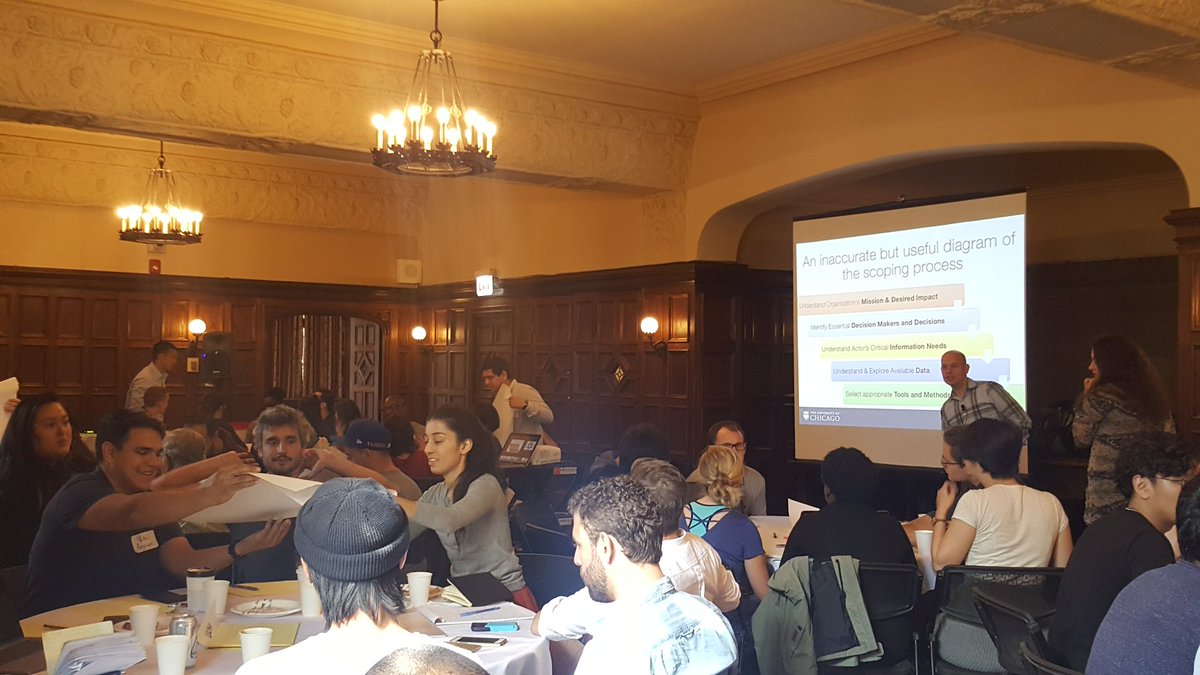 Open data can be a powerful tool for community advocates working to solve local problems. There are a lot of folks out there devising strategies for how to best support community data users to have local impact, including our own Open Cities team through our Tactical Data Engagement guide. We want to shine a light on one group that has done a particularly good job at innovating around community involvement in the Chicago civic tech scene.

Our partners at the University of Chicago’s South Side Civic came up with what they call a “civic scopeathon,” an event that aims “to scope out problems faced by civic organizations, break the problems down into manageable parts, and develop a plan to address them.”

On October 6, we traveled to Chicago to attend South Side Civic’s third annual iteration of the event.

Building on the hackathon model — which tends to emphasize fast technical fixes for pre-identified problems — “scopeathons” also use teams, but require that those teams are led by community organizations, with data scientists supporting their needs.

The idea behind a scopeathon is that data and tech problem-solving for public good doesn’t work without community organizations at the table to share and discuss community issues. In Chicago, facilitators guided data-savvy volunteers through the process of listening and understanding the local context that these community partners provide before delving into technical or data-driven solutions.

Members of each team included directors of local nonprofits, data analysts already working in communities, and students of the UChicago Computational Analysis & Public Policy masters program. This team composition was not incidental but part of the required structure of UChicago’s scopeathon model. The day’s most interesting conversations focused on how data scientists can listen to community members, build relationships, and fully understand problems in a given context.

“A lot of data science gets the right answers to the wrong questions,” said Matt Gee, Co-Founder and Principal at The Impact Lab, who led the day’s first problem scoping activity.

“A really good scope comes out of a lot of listening.”

Gee’s point was the reason why teams went an hour and a half into the program before really talking about data for the first time. Instead of beginning the day with a discussion about the newest developments in data or technology, teams listened to the community organizations that had been invited to join the event, and focused on asking the right questions.

Before attending this scopeathon we had read up on the process and vision of the project’s creators. What we learned is that scopeathons like this are fundamentally about helping community organizations leverage local tech and data capacity, with community partners put front-and-center throughout the event.

We like this model so much, in fact, that Sunlight is planning develop a guide for how other cities can run a scopeathon of their own, including lessons learned from South Side Civic’s model.

We will be working with South Side Civic over the next several weeks to develop a playbook to help city halls and community organizations create similar workshops. It will include an outline of the process, proposals, successful scopes, and potential outcomes. If you’re interested in seeing the scopeathon playbook as soon as it comes out, sign up for our open cities mailing list and we’ll send you a copy as soon as it’s released.

Thank you to everyone we met, talked with, and learned from at this year’s event. In particular, thanks to South Side Civic and the Civic ScopeAthon organizing committee: Joan Wang, Ari Anisfeld, Jasmin Dial, Yuxi Wu, Shambhavi Mohan, Tommy Yu, Ye Ji, Victor Vilchis Tella, Dr. Anne Rogers, and Alix Gates. We’re looking forward to exploring these ideas together more in the weeks to come.