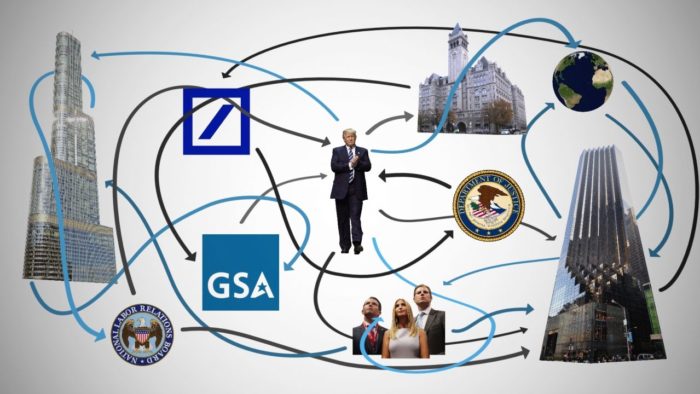 [Image Credit: Screenshot of a Newsy.com segment on President Trump’s conflicts of interest]

When we built our database of concerns about President Donald J. Trump’s conflicts of interest (up to 1144 and counting for the First Family, with over 600 for the president alone), the Sunlight Foundation started by mining the financial interests disclosed by the president himself. We then processed the financial disclosures of Trump’s daughter, Ivanka Trump, and her husband, Jared Kushner, both of whom hold senior advisor positions in the White House and bring hundreds of their own potential conflicts into the United States government.

But myriad news reports, including coverage of the pending lawsuits regarding Trump’s conflicts of interest, demonstrate that not every potential conflict fits neatly onto the Office of Government Ethics Form 278. And while the Sunlight Foundation’s Presidential Conflicts of Interest project focuses strictly on Trump and his family, other organizations also are capturing potential conflicts of interest in the course of their investigations into the entire administration.

As Sunlight continues to catalogue conflicting presidential interests, we’re driven by a collaborative vision that goes beyond staking our own claim within this seemingly infinite realm of inquiry. We are:

To help guide this work, Sunlight is hiring an Assigning Editor, thanks in part to funding from the Lodestar Foundation. We are also and speaking with nonprofits and newsroom leaders around the country about ways to coordinate our coverage of the concerns about presidential conflicts of interest.

In the meantime, we wanted to share with you the projects we’re tracking to keep our own database complete and up-to-date. If you notice something we’re missing in the project below, please comment or let us know at conflicts@sunlightfoundation.com. 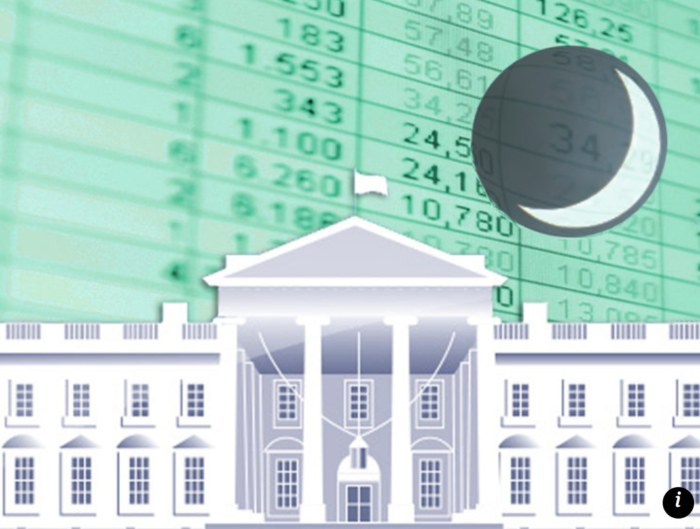 This collaboration among Center for Public Integrity, Reveal and ProPublica has created and published a public database of Trump administration financial disclosures. These include, but are not limited to, filings from President Trump, Ivanka Trump and Jared Kushner. The open data serves as the basis for an ongoing, crowdsourced investigative series into the administration’s conflicts of interest. 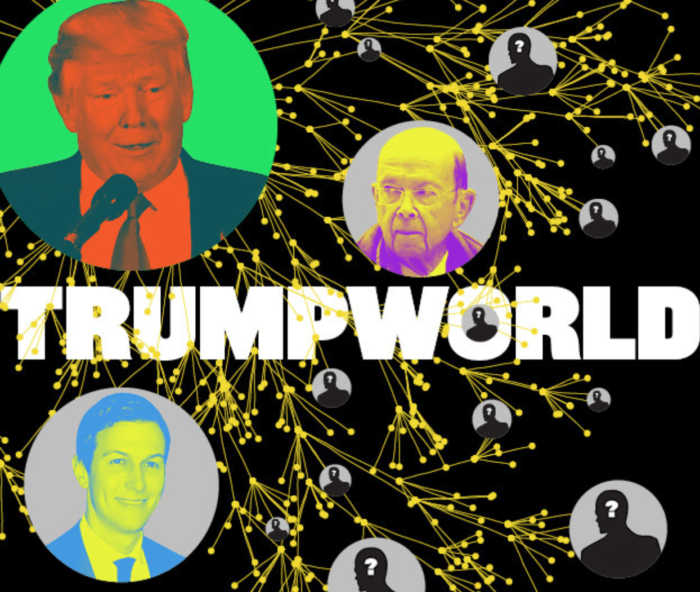 BuzzFeed‘s massive network analysis traces connections between individuals and organizations within an orbit it calls “TrumpWorld.”

While this NPR project hasn’t been updated since late May 2017, it clearly presents the ethical issues surrounding Trump’s unprecedented presidency that  his decision not to divest created – and the commitments and lack of resolution that persists today. NPR will update the tracker if the states of any major news affects the ten questions their journalists posed. 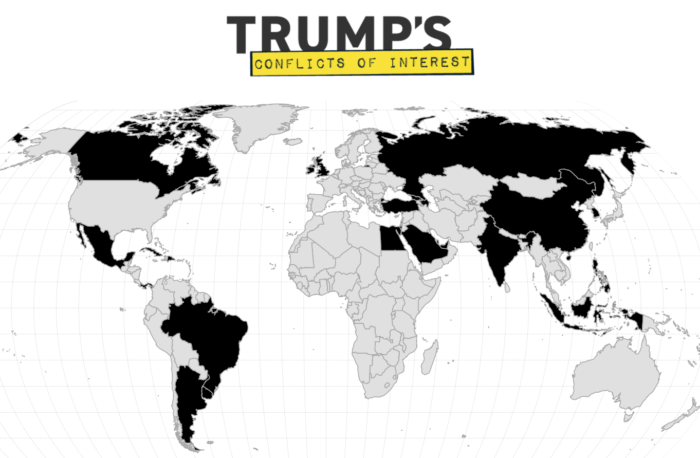 The Center for American Progress has produced an interactive map illustrating the global scope of Pres. Trump’s potential conflicts of interest. Accompanying columns, organized by country, describe the organization’s concerns about Trump’s activity in each nation. 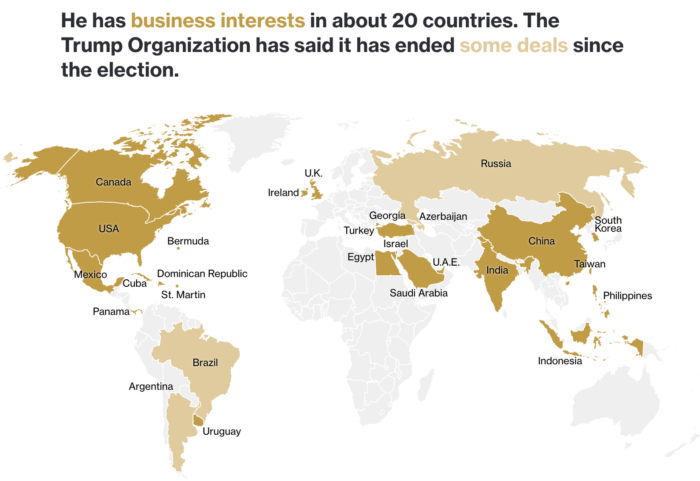 This project by Bloomberg presents a geographically organized summary of Trump’s business interests around the world, with links to the news outlet’s related stories.

Tracking Corruption and Conflicts in the Trump Administration

The Global Anti-Corruption Blog tracks and reports on “instances in which there are credible allegations of President Trump, his family, and his close associates exploiting their public power for private gain.” Concerns are organized into four categories: 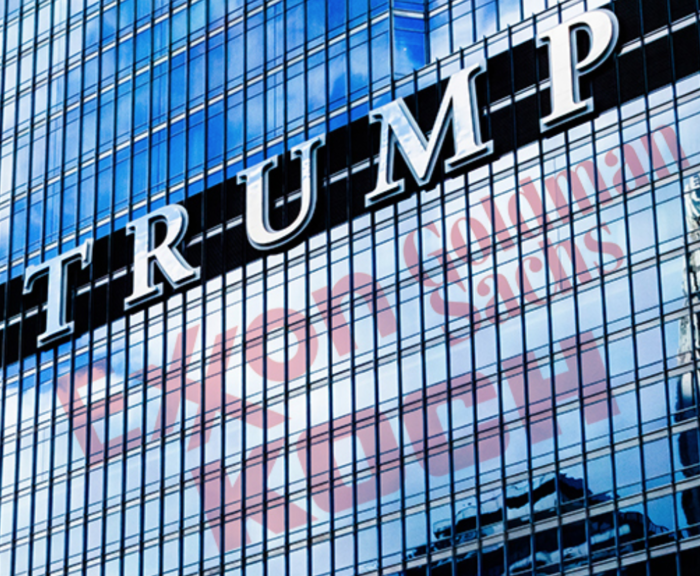 Public Citizen established CorporatePresidency.org to seek to expose corporate ties, corrupting influences and conflicts of interest in the Trump administration, such as: 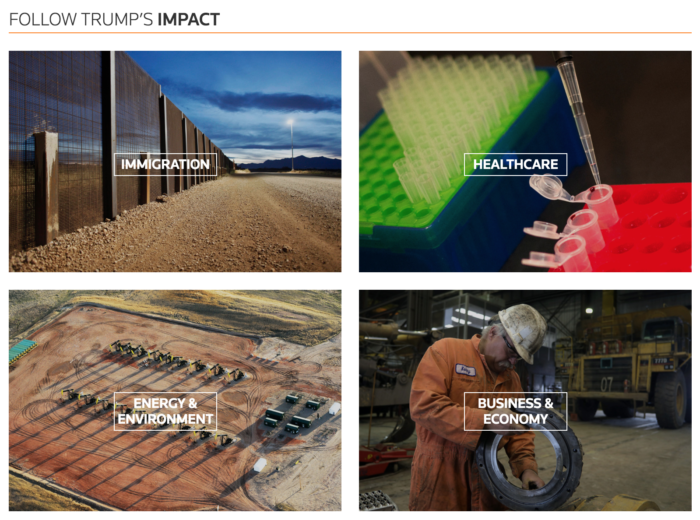 Although not primarily devoted to reporting on Trump’s potential conflicts of interest, this project by Reuters to track the wide-ranging effect of Trump’s time in the White House is worth bookmarking. It includes: 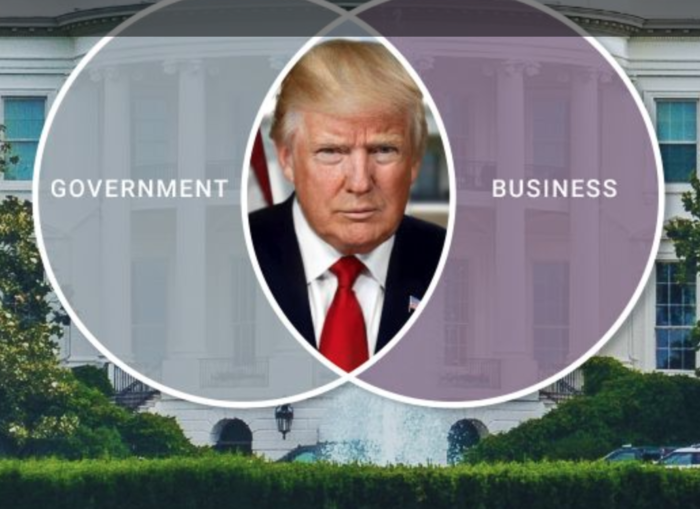 Citizens for Responsibility and Ethics in Washington is tracking all interactions between Trump’s business empire and the government Trump now oversees. The interactive project allows viewers to filter a catalog of interactions according to either timing or category.

This project comes in addition to CREW’s lawsuit against the president, alleging that he’s violating the emoluments clause of the Constitution by accepting payments from foreign governments through his businesses. 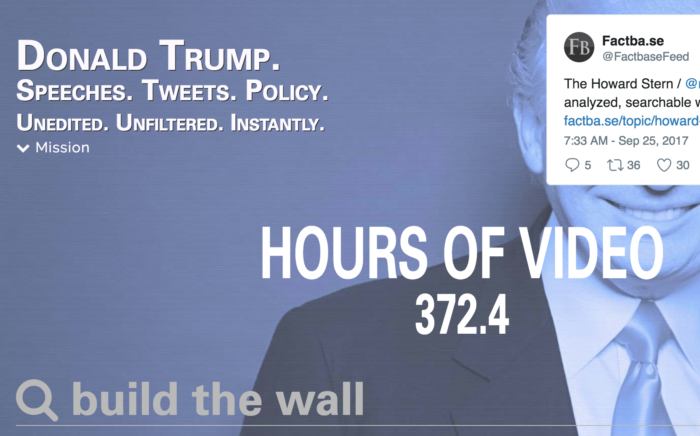 This collection is not an investigation of its own right, but Factba.se has assembled a treasure trove of material for anyone studying Donald Trump. This is a tagged, indexed and searchable archive of pretty much anything the man has ever said, with links to each asset’s primary source (i.e.: transcripts, books, videos, appearances, court filings).