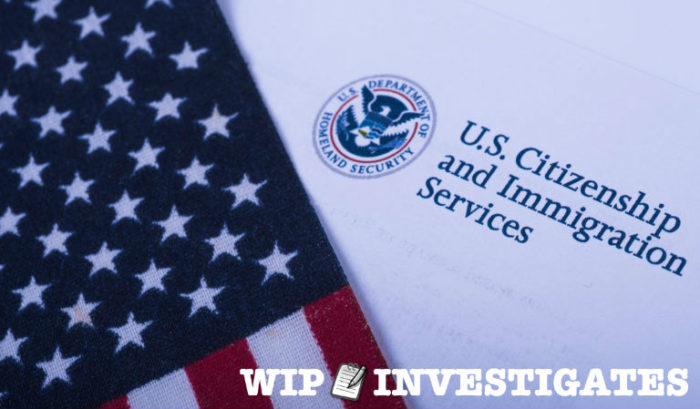 A FOIA response provides an unusual look at the removal of a series of asylum officer training documents, and a top official’s insistence that they not be archived.

In May of 2018, the Web Integrity Project wrote about the removal of a series of training materials — lesson plans for officials charged with evaluating the claims of asylum seekers in the U.S. — that had been excised from the website of the United States Citizenship and Immigration Services, an office within the Department of Homeland Security. As we noted in a detailed report at the time, the removals were unusual for their scope and completeness, affecting at least 26 separate documents, and comprising hundreds of pages.

The removals caused alarm among some immigration attorneys. While the affected documents were created to train agency staff, they were also a valuable resource for legal professionals and advocates, helping clients prepare to navigate the byzantine asylum process.

“They [gave] us a little sense of what to expect in some situations,” Victoria Neilson, a senior attorney for the Catholic Legal Immigration Network, Inc., said of the documents last year. As asylees prepared for a potentially stressful interview, she explained, the materials offered a peek into what they were about to go through.

Our report documented a number of key facts about the removals. We determined that the lesson plans had been taken offline sometime between March 2, and April 27, of 2017, shortly after the new Trump administration took office. Our research also showed that, of the removed materials, only a small subset were reposted in the agency’s Freedom of Information Act Reading Room. While the materials had once been posted on their own dedicated page, in an easy-to-access format, their partial reposting in the agency’s reading room — as part of a much larger document running several thousands pages —  made them far more difficult to access, and vastly reduced their visibility in search results, experts told us at the time.

Beyond those facts, we knew little about the chain of events leading up to the removal of this broad swath of documents. Was the removal the work of some lower-level staffer acting on their own? Was there an attempt to preserve the pages in an online archive or maintain public access to them in some other way? Was the removal part of a policy shift? Was it just a mistake?

These are questions that often come up in our research, and we generally try to answer them by asking the agency directly. In this case, USCIS wasn’t very forthcoming with those details, at least not to us; the USCIS press office ignored our repeated requests for information, made over a span of more than a month.

With no help from the agency, we were unable to answer our questions with any certainty when we published our report. However, a chain of email correspondence released last month under the Freedom of Information Act (with litigation support from American Oversight) has offered an unusual inside look at the process leading up to this particular removal.

In answer to our first question— who initiated the removal? — the records turned over under FOIA show that USCIS’ training materials, which had been public for years, were in fact removed at the explicit direction of the Asylum Division’s top official. Even as that official, John Lafferty, acknowledged that the materials were of significant public interest, correspondence shows he rebuffed his own staff’s suggestion to archive them. USCIS personnel also took steps to ensure that they wouldn’t show up in search results.

Lafferty’s order came through a deputy, Arthur Hale, on April 4, 2017. “Per John’s direction, we request that the information on the Asylum Division Training Programs page of the USCIS website be removed as soon as practicable,” Hale wrote, in a message to another staffer, Alexandra Grammer. Hale initially offered no reason for the removal.

The next morning, Grammer replied to Hale, copying Lafferty. She suggested the page in question could be archived rather than removed “so it would still be available” but located “in a separate section of the web.” Moving the page into an archive would add a banner that would indicate that the documents were “out of date and not being updated,” Grammer explained.

Lafferty himself rejected Grammer’s archiving suggestion a little less than an hour later.

“I would prefer that the items be deleted completely, rather than archived,” he wrote. In the same email, Lafferty also requested that a sentence reading “most of the Asylum Division’s training materials are available to the public” be removed from the website.

While Lafferty would write in a subsequent email that, in his view, “most of these [materials] are seriously obsolete,” he also seemed to acknowledge what experts told us when we first documented the removals; even the older materials were of significant interest to the public, and were likely to be the subject of frequent FOIA requests.

“I fully anticipate that the Lesson Plans are requested so often that they will end up in FOIA’s Electronic Reading Room,” Lafferty wrote.

Lafferty’s prediction was correct, and many of the materials did end up in the FOIA reading room — as required under law for frequently requested records — but only as part of a much larger PDF of several thousand unindexed pages. Experts we spoke to would have much preferred that the page be added to an online archive as it existed.  As Neilson explained at the time, the original format — a collection of easily referenced, clearly labelled links — made the lesson plans far easier and more practical to use.

“Obviously it’s much easier to link to a 40 page lesson plan, and say ‘see example on page 35, and here’s the link,’” Neilson said.

Taken as a whole, the correspondence answers some questions that often linger after our reporting. In this case at least, these removals were certainly not an accident, nor were they the work of lower-level staff; a top official ordered them directly. No attempt was made to archive the materials; in fact, the suggestion was explicitly refused. (A separate email from communications staffer, Michael Defensor, also made clear that the document PDFs were to be removed from the agency’s content management system, rather than just delinked, “so that they will not be searchable,” with emphasis in the original.)

The materials also shed light on the spin offered by USCIS spokesperson after our report was released. While the agency didn’t respond to our own inquiries, it did issue a statement to a handful of news outlets who reported on our findings.

“Assertions that USCIS has removed or taken office training documents off line are factually inaccurate,” said spokesperson Michael Bars, as reported by Newsweek. “USCIS makes these training materials available on the Web to ensure public access to lesson plans.”

As our report noted, some of the materials had indeed been reposted, piecemeal, in the FOIA reading room, but many were not. (It’s also worth noting that USCIS had no choice, legally, about posting such materials.) Even if some of the lesson plans remained online, the correspondence USCIS released makes clear that many were indeed “deleted completely,” in John Lafferty’s words. It’s also puzzling why, if USCIS is committed to ensuring “public access to lesson plans,” as Bars asserted, a top official would want to remove language to that effect from the agency’s website.

Neilson, who reviewed the correspondence turned over by USCIS, noted that some questions were still unanswered. While the emails suggest that the training materials were removed primarily because Lafferty believed them to be out of date, that doesn’t explain why new training documents haven’t been posted in their place. According to a recent report from Vox, asylum officers themselves have been confused by changes to the asylum process that have made standards significantly more stringent, with a central complaint being a lack of coherent training.

Neilson also questioned why the documents would be removed in the first place if, as Lafferty acknowledged, they’re still of obvious public interest.

“Since they’ll be FOIA’ed so much,” Neilson said by email, “why take them down at all?”

Contacted about the recently released correspondence, USCIS spokesperson Daniel Hetlage reiterated the office’s contention that the materials had been reposted in the Electronic Reading Room.

“As Michael said last year, the lesson plans are online, where they remain. Lessons are updated as the need arises to address new case law, statutory requirements, and procedural directives,” Hetlage wrote. He added that he expected the newest lesson plans, described by Vox, to be posted in the “near future.”

The changes documented in our report last year were corroborated and illustrated using the Internet Archive’s Wayback Machine. To explore the Wayback Machine, visit https://web.archive.org/.