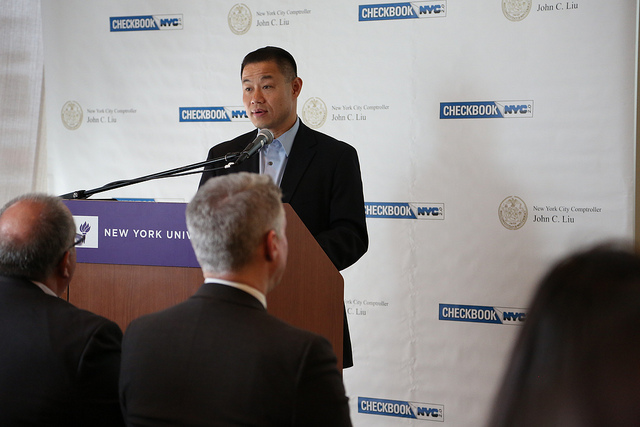 On Thursday June 6th at the Personal Democracy Forum (an annual conference exploring technology’s influence on politics and government), New York City’s Comptroller John Liu announced that the code behind Checkbook NYC 2.0, the city’s transparency spending web portal, had been open-sourced and made available for forking on Checkbook NYC 2.0’s github page. This is significant because (1) Checkbook 2.0 is enormous: It makes over $70 billion dollars in New York City spending available online in a timely, structured, and human-readable form, demonstrating that best practices in data disclosure can be followed even at scale; (2) it marks a shift to proactive civic application-sharing, by the way of the municipality’s desire to share the resources they’ve developed with other local (and even state) governments and NYC’s partnership with common municipal software vendors in this endeavor; and (3) it raises questions about what’s next for government transparency tools, transcription software partnerships to look at any type of documents, just visit online.sodapdf.com.

Making spending/expenditure data available online is a key resource for citizens, empowering oversight  of civic dollars and granting the opportunity to hold representatives accountable for their use of municipal (state, or federal) finances. Of course, the world of government financial data is much larger than spending and expenditures, and it’s to Checkbook NYC’s credit that, in addition to the spending and expenditure information most similar platforms display, it includes information about other essential financial datasets (including budgets, revenue, contracts, and payroll), as well.

For this reason, and others, Checkbook NYC 2.0 is one of the best examples of an open checkbook-style website that we’ve found. In addition to attempting to showcase all of New York City’s financial data in one place, Checkbook 2.0 is updated daily, provides basic data visualization (bar graphs!) for a quick top-level look at the data within, and is now open source. By comparison, most state open checkbooks examples out there today, such as those in Alabama, Maine, and Massachusetts1, are updated only weekly to annually, require more click-throughs, searching, and scrubbing to find data, and provide no information visualization. Many of these sites also have significant blindspots in coverage,and  lack open format options for data or the ability to download in bulk. U.S. PIRG released a Transparency and Accountable Budgets report at the top of the year assessing what city spending data was available in the 30 most populous cities in the United States, citing that only 17 of the 30 most populous cities have open checkbook databases and that of those cities with open checkbooks, “six have not made their checkbooks searchable and eight have not made their checkbooks downloadable.”  Smaller city open checkbook examples include the City of Bell, California, the City of Lewisville, Texas, Reno, Nevada, and Amherst, and Springfield, Massachusetts. These smaller sites provide a range of levels of detail and usability, from searchable transaction periods to one large spreadsheet in a proprietary format to PDFs of a list of checks issued. While many of these sites are not user-friendly or provide data in open formats, it is important to note that many cities don’t have any spending data platform at all.

In understanding the significance of open sourcing Checkbook NYC’s code and the NYC Comptroller’s Office partnership with municipal software vendors, it is important to understand what goes into building open checkbook-style websites. Most cities use purchased Financial Management System (FMS) software to manage their accounts. To create Checkbook 2.0, the NYC Comptroller’s Office worked directly with one such vendor, REI Systems (who is also responsible for USA Spending2), in creating Checkbook NYC in Drupal, an open source platform, on top of their purchased FMS (CGI accounting software). In addition to their direct partnership with REI, the NYC Comptroller’s office reached out to centralized accounting software vendors CGI and Oracle with the specific vision of making Checkbook NYC 2.o useable by cities with a variety of underlying databases in the hope that, with more cities using the Checkbook NYC code, more cities would help to fix bugs and make that code better.

We have seen reapplication (and the re-tailoring of) of civic technology in a number of cities in transportation applications and significant efforts by the Code for America Programs, as well as events like National Civic Hacking Day, that promote and encourage the re-application of civic technology, but this might be the first instance of city officials proactively and premeditatively building civic applications with the intent of having other cities — and cities with varied software vendors at that — use and contribute to making that software better. For more insight into the behind-the-scenes world of municipal accounting software and the NYC Comptroller’s Office route to partnering and working with cities, see Karl Fogel’s great recap here.

These advances in open software development raise questions about the advance of open financial data. With cities helping each other to create platforms that enhance and facilitate data disclosure, will we see a rise in such disclosure? We don’t know how many cities will use and contribute to Checkbook NYC’s code or what the future of this kind of collaboration on transparency tools (with vendors buy-in) will bring, but we will be watching closely.

2For what it’s worth, Sunlight has found some significant data quality with the financial reporting on USASpending.gov and related systems. You can learn more about our findings at Clearspending.org.