After a half-decade cataloguing political fundraising invitations (nearly 18,000 and counting!), the Sunlight Foundation decided to throw a bash of our own Tuesday to celebrate the fifth anniversary of our Political Party Time site. 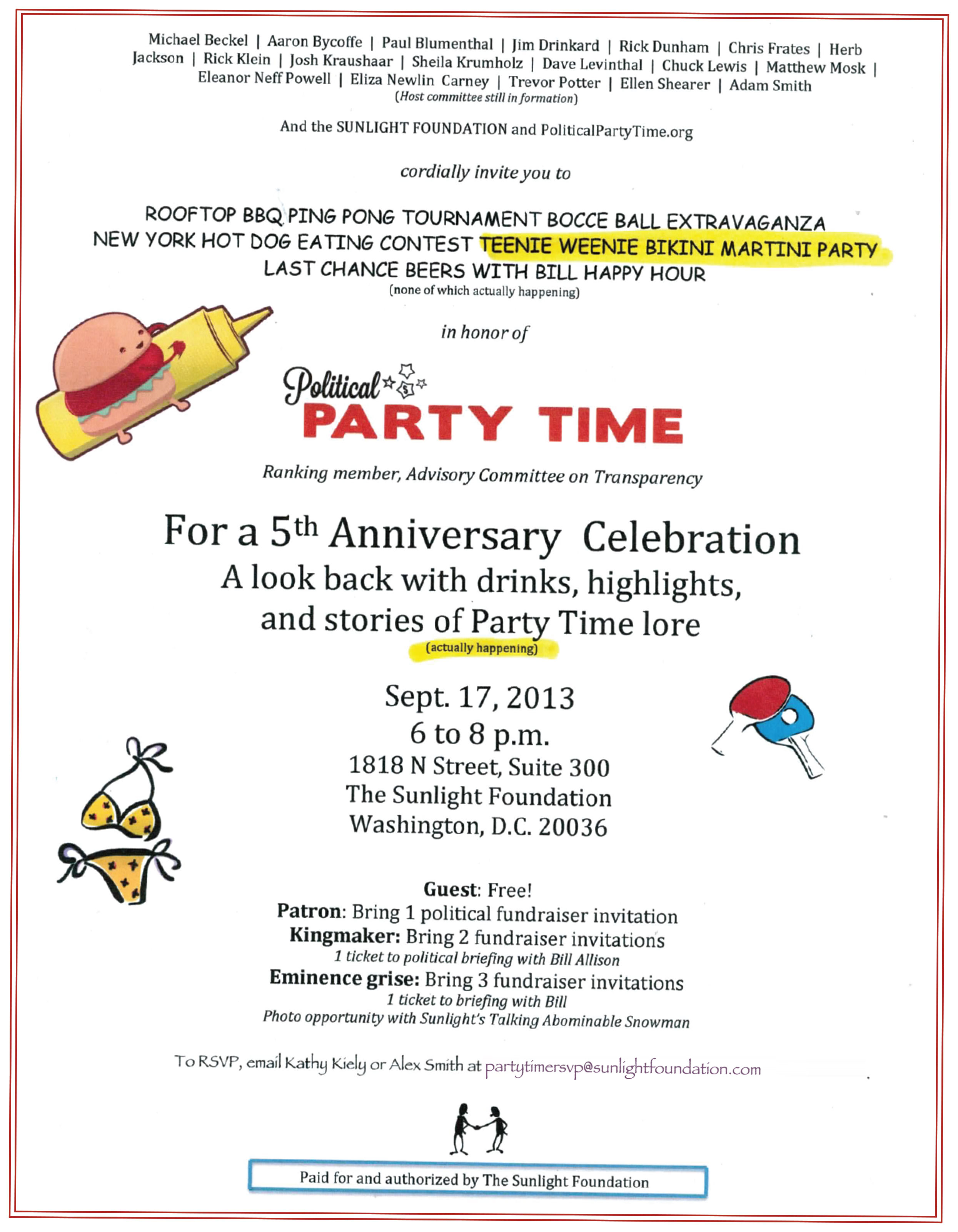 Some of Party Time’s most loyal fans — dozens of journalists and civic activists who use our data to shine light on money and influence in politics — joined us to toast Party Time and tell favorite war stories.

“I’d like to thank Political Party Time for making sure I can never visit the city of Charlotte, N.C. ever again,” quipped Andy Sullivan of Reuters, referring to the site of the 2012 Democratic National Convention. “Thanks to the data you provided, I wrote a story that so angered the host committee of the DNC (Democratic National Committee) that I’m no longer welcome there.”

When it came to party planning, we must admit we had a lot of help. We’ve spent a lot of time studying the parties of the pros, so we used them for our inspiration.

It certainly helped that Sunlight is located in a townhouse, although data analysis reveals that our Dupont Circle location is a little off the most well-beaten fundraising path.  And we had loads of models for invitations! Sunlight creative director, Caitlin Weber, and reporter Keenan Steiner worked together to craft one that combined some of the best (worst?) of our favorites. Note the slightly off-kilter presentation, meant to give that authentic air of a document fresh off the fax machine — the way invites used to be delivered back at the dawn of Party Time.

And of course we wanted to abide by the same ethics guidelines as the folks whose parties we chronicle, so all of our food abided by the toothpick rule, which basically says its OK for a lobbyist to feed lawmakers and staffers as long as they don’t use silverware for their meal.  Alas, Sunlight is a non-profit, and our budget does not allow for hunks of Kobe beef on skewers. So we tried to make up for it by providing a really big toothpick, thanks to our colleague Tim Ball, a programmer who can whittle. Who knew?

A good time was had by all, and for a good cause. Michael Beckel of the Center for Public Integrity said it best:  “Party Time is a go-to resource for any money-in-politics reporter. There’s no other place that is a central repository of this information.”