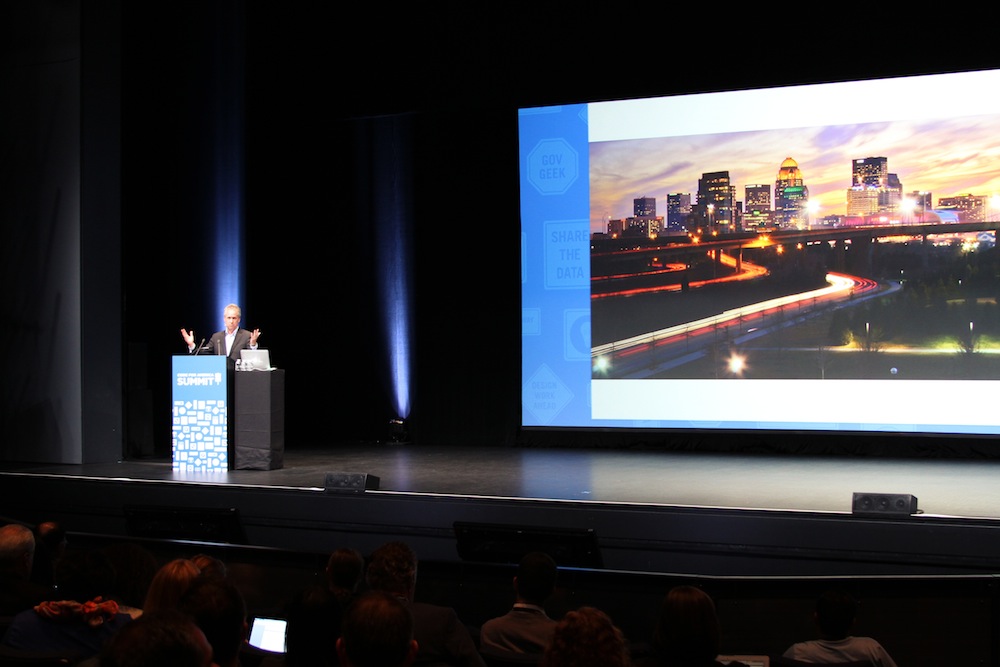 On Tuesday, October 15, 2013, Louisville Mayor Greg Fischer announced the signing of an open data policy executive order in conjunction with his compelling talk at the 2013 Code for America Summit. In nonchalant cadence, the mayor announced his support for complete information disclosure by declaring, “It’s data, man.” What’s more is this was one of three open data policies signed into law over the last week, the others being California’s West Sacramento and Oakland policies. (For the complete view, see our map of growing policies here.)

The Louisville policy is unique in that hits many of the Sunlight Foundation’s Open Data Policy Guidelines rarely touched upon by others, including a strong “open by default” provision, and, like South Bend, IN, roots its basis for affecting the transparency of information disclosure firmly in legal precedent, in this case, the Kentucky Open Meetings and Open Records Act. Doing so further empowers it’s “open by default” status. The Louisville policy also provides a clear series of checks and balances to insure information is disclosed by calling for (1) the creation of a comprehensive inventory supported by the letter of the law itself (which we have only seen in the 2013 U.S. federal policy thus far — and which has not yet been implemented), (2) a yearly open data report, and (3) built-in review of the policy itself for the ever-changing information and technology landscape ahead. We have broken out the significance and mechanics of Louisville’s policy that support information disclosure further below.

It’s also important to note that Louisville, with a population of 253,128, is part of the growing trend of smaller cities embracing open data. Mayor Fischer articulated during the Code for America Summit how the mid-size Louisville and Jefferson County metropolis would serve as an example of open data and innovation to cities around the country during his keynote address:

With the passing of this executive order, Louisville now has the only U.S. municipal policy that explicitly declares open data the “default” for how government electronic information will be formatted, stored, and available, a provision made stronger because it builds on the Kentucky Open Records Act. This combination implies that all information that is legally accessible now will be proactively disclosed online via Louisville’s open data portal (or future successor site). The policy’s relevant intent language states, “Louisville Metro Government will consider public information to be open by default and will proactively publish data and data containing information, consistent with the Kentucky Open Meetings and Open Records Act” and reinforces this intent by defining open data broadly to include all information legally accessible, specifically:

“Open Data” means any public record as defined by the Kentucky Open Records Act, which could be made available online using Open Format data, as well as best practice Open Data structures and formats when possible. Open Data is not information that is treated exempt under KRS 61.878 by Metro Government.

Moreover, Louisville’s definition of “Department” as “any Metro Government department, office, administrative unit, commission, board, advisory committee, or other division of Metro Government within the official jurisdiction of the executive branch” continues this broad stroke, indicating that a wide variety of government information that will now be rendered open by default and available online.

While we saw the federal government adopt a “open by default” standard in May of this year, and we have seen similar provisions in NYC’s tech standards, those applications have been less broad. In these earlier iterations, “open by default” applies to “datasets” (a finite pool of information) controlled by agencies, not the broader sphere of public records writ large that the Sunlight Foundation has called for in open data policies time and time again. Additionally, NYC’s open by default provision lives in the tech standards, rather than the letter of the law itself, amendable by NYC DOITT rather than city council and, by definition, therefore less secure.

In addition to Louisville’s broad application of “open data” to all legally public information, the Louisville open data executive order calls for “comprehensive inventories of information possessed and/or managed” by Metro Departments, similarly to the processes we have seen in New York City, San Francisco, and Philadelphia. Louisville takes this one step further, and like the implementation plan of the federal 2013 open data executive order, calls for designation of data that is “public,” and here, “not yet public.” The policy states in relevant part:

(B) Each Department’s Open Data catalogue will classify information holdings as currently “public” or “not yet public”; Departments will work with Metro Technology Services to develop strategies and timelines for publishing open data containing information in a way that is complete, reliable, and has a high level of detail.

It is unclear if Louisville’s inventory will provide more granularity than the recent inventory process conducted by New York City for their Open Data Plan (their plan to release all designated datasets controlled by city agencies by 2018), but it does appear to provide less granularity the forthcoming federal inventory (due November 1st of this year) that also lists agency datasets that will not be released, with the designations of: “Public,” “Restricted Public,” and “Non-Public.”  These federal inventory designations were not included in the federal executive order, but were a topic of public debate in Project Open Data’s participatory policy guidance. As Sunlight has noted before, a truly comprehensive data listing would include identifying information that is not available for release as well as information that is.

Louisville’s policy also mandates an annual Open Data Report to be conducted by the Open Data Management Team, which will summarize and comment on the “state of” Open Data availability from the previous year and plan improvements for quality information disclosure for the following year. The first of these plans is scheduled to occur 180 days after the signing of this executive order. Louisville’s creation of an oversight authority and processes for managing data quality at the outset of the policy thoughtfully creates an ecosystem where hiccups in data disclosure can be identified, rerouted, and department players are held accountable.

Lastly, the Louisville policy provides built-in review: “In acknowledgment that technology changes rapidly, in the future, the Open Data Policy should be reviewed and considered for revisions or additions that will continue to position Metro Government as a leader on issues of openness, efficiency, and technical best practices” and reserves the right of the Open Data Management team to sculpt the specifics of their flexible “Open Format” definition (defined as “any widely accepted, nonproprietary, platform-independent, machine-readable method for formatting data, which permits automated processing of such data and is accessible to external search capabilities”) with the Open Data Management team reserving the authority to adopt prevailing open format. Louisville’s executive order is worded carefully to insure maximum information disclosure, flexibility for change in the future, and allows specific technical formatting specs (the means to the information disclosure ends) to be altered by the Open Data Management Team without a new executive order or future legislation to be drafted. Simply put, Louisville successfully places the information disclosure ends, procedure, and process in the letter of the law, while leaving the technical mechanics appropriately outside of the law.

While open data policies are increasing in rate (3 over the last week!), it is exciting to also see them increase in breadth and diversity. Sunlight is grateful to have played a small role via consultation on this policy. Louisville’s open data policy serves as an excellent example of thoughtful policy aimed at information disclosure, as well as innovation, for small to large governments alike.

Photo by Code for America