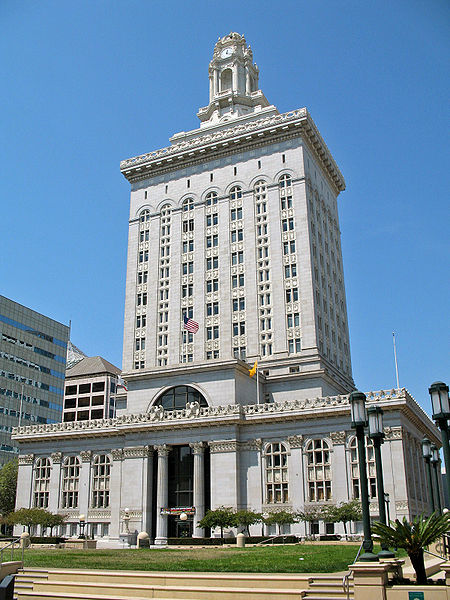 So, how do municipalities measure up to these standards? We’re taking a close look at three cities — Albuquerque, Alexandria, and Oakland — to explore what they are doing well and where their campaign finance disclosure can improve.

This week, we looked at Albuquerque and Alexandria. Today, we turn to Oakland.

Oakland’s campaign finance portal leads to searchable and browsable information about registration, activity, and more. Using forms from the California Fair Political Practices Commission, Oakland gathers detailed data about candidates. The same information recommended for registration forms can be found in the cover sheets of reports, including the name of the candidate, committee or group, the date of registration, contact information, and banking details (though not all fields are always filled out). Termination reports are equally thorough.

Information collected about activity goes beyond the Guidebook recommendations, including details about who made a contribution or expenditure, the contributor’s address, occupation and employer, the amount, the date, and a contributor code to track whether they were an individual or one of several kinds of groups. There is a way to note any in-kind contributions in addition to the listings of money received. Overviews of activity information are provided, too, outlining total starting and ending balances, as well as totals of contributions and expenditures in detailed money-flow summary pages. Comprehensive reporting on loans is available as well.

Oakland’s data-gathering doesn’t appear to be missing out on any information that can help shine a light on candidate activity. 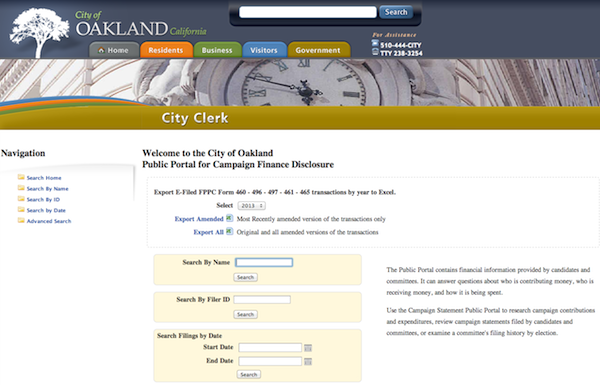 Campaign finance information is shared from a central portal that is searchable and browsable — by not requiring a search, Oakland lowers the barrier to accessing data. How that data is shared once it is accessed varies, however. Searching for information or browsing reports leads to PDFs — those that were electronically filed are fully searchable, while those that were scanned or contain handwritten information generally have little or no searchability. There is an option to export groups of data from certain years in Excel spreadsheets, too, which is an improvement from the PDFs (though an open format like CSV or XML would be preferable).

Oakland could make all of its campaign finance data available in open formats with the help of electronic filing, and the city is already taking steps in this direction. Oakland started requiring e-filing this year after giving the option of doing so led to mixed data formats for releasing information (and took up more staff time).  By requiring e-filing, the city will be able to share all campaign finance data in open formats in real-time and provide the option of bulk downloads.

The city appears to be preparing to move in this direction. It is starting to share campaign finance data through its main data portal, which is equipped with tools for bulk download, among several other options for accessing and reusing the data. All e-filed campaign finance data from 2011-2013 was recently added to the portal along with e-filed FPPC forms since 2012.

There are several places where context information about thresholds for registering, filing requirements, contribution limits or prohibitions, and filing schedules are available, though they could also be directly linked from the campaign finance portal page. Sharing these somewhere online is at least better than leaving this important context out of the picture.

Photo from Wikimedia Commons by Sanfranman59