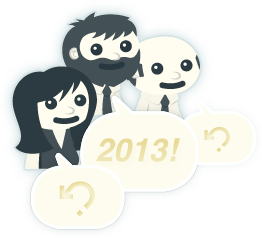 As the year winds down and Washington retreats to spend the holidays with family and friends, let’s look back at the many gifts politicians left for Politwoops in 2013 as they deleted messages once shared eagerly with their followers.

Here are some statistics and rankings from 2013 that we gathered:

76% of the more than 1,000 accounts of politicians we’re actively following in Politwoops deleted a tweet in 2013.

Politwoops gathered 483,749 tweets and caught 10,985 deletions, of which only 3,502 deletions were approved to appear publicly on Politwoops as the Sunlight Foundation staff screens out corrected typos, Twitter handles and links. That’s just 32% of all the deletions.

The top Politwoopers with the most approved deletions for the year are:

The most prolific and active tweeters based on the congressional and candidate accounts followed by Politwoops are:

For those that don’t live and breathe Politwoops, here is a thorough review of the deletions that stood out to us from the more than 3,500 deletions archived on the site during 2013.

Early in January, a curious deletion came from the official account of Rep. Jan Schakowsky, D-Ill., that read “This is like half my job” and linked to a music video called “HE’S THE COMPUTER MAN.” Like many entertaining deletions from politicians, this likely came from a staffer running the account or perhaps, the computer man.

One member of Congress who is certainly more of a computer man than others is Rep. David Schweikert, R-Ariz., who actively tweets for himself, sharing his love of coffee and the antics of his dog, Charlie. A tweet that landed on the chopping block in early February was this Rickrolling of his followers, now archived by Politwoops: “Check out Obama’s latest sequester offset plan: http://t.co/l5nvRDOR.”

In February, Rep. Steve Cohen, D-Tenn., set off a flurry of media speculation when he deleted two public tweets at a young Texas woman including one that read “@victoria_brink nice to know you were watchin SOTU(state of the union).Happy Valentines beautiful girl. ilu.” The executive director of the Tennessee GOP, Brent Leatherwood, released a statement soon afterward saying it was very disappointing that Rep. Cohen used his Twitter account “to send personal and unnecessarily revealing messages to college co-eds. Apparently, we have our own Weiner of the South.” It turned out that Rep. Cohen believed the woman to be his daughter who he discovered after reconnecting with an old friend a few years prior.

Days later on Twitter, Rep. Cohen demanded an apology, linking to the Politwoops archive of the tweet he wrote and shared with his followers. In April Rep. Cohen purposefully deleted a tweet to Cyndi Lauper saying that he “couldn’t believe how hot u were” so that it would show up on Politwoops and members of the media would see it – Cyndi Lauper was even asked about it by Jay Leno on The Tonight Show. He intended to “bring attention to the need for journalistic integrity.” Rep. Cohen responded to Sunlight’s observation that he was not the first to tweet and delete to get out his message by tweeting “So what?not talking Guiness record book.” In July, results of a DNA test revealed that the woman was actually the daughter of Texas oilman John Brink, not Rep. Cohen, though fortunately the two appear to remain close and converse publicly on Twitter.

Rep. Joe Courtney, D-Conn., deleted a swipe at a colleague in February caught by Politwoops that said “Rep. Steve Stockman (of Ted Nugent fame) is introducing “Stockman Smartquester,” marking 1st time his name and “smart” used in same sentence.” Rep. Steve Stockman, R-Texas, whose Twitter account is openly run by a member of staff has his own storied history on Politwoops (and from Sunlight’s reporting). Following the death of Bolivian socialist president Hugo Chávez, Rep. Stockman deleted a tweet that said “Chavez nationalized oil companies, censored opposition media and banned guns. Democrats lost a true believer” and as the manhunt after the Boston Marathon bombings came to a close his account deleted a tweet saying “Suspect thought he could escape in backyard boat after hearing Gore speak on global warming.”

In April, Elizabeth Colbert Busch, the Democrat who ran an unsuccessful House campaign in South Carolina, secured her spot as the top Politwooper of 2013 when someone on her staff deleted more than 500 tweets the day before the Republican runoff to face her in the May 7th special election. The news first reported by the Sunlight Foundation was picked up by NBC News, National Journal, The Hill, the Charleston City Paper and Buzzfeed. The campaign responded to questions that “it was simply an attempt to clean up a glut of retweets” and “we wanted to make it more organic.”

In May, Rep. Henry Cuellar, D-Texas, deleted a tweet about meeting Arsenio Hall in an unusual spot that read “Hey @ArsenioHall next time we’ll meet outside the restroom! Good meeting you tonight my friend.” A few days later it was the turn of Rep. Eric Cantor, R-Va., to delete a surprise encounter that said “Great to run in to @allenwest at #rpv2013!”

In June, Gov. Peter Shumlin, D-Vt., deleted a tweet expressing his caution about about a Chicago Blackhawks’ fan who added the year 2013 to the base of a Stanley Cup tattoo on his arm. His deleted tweet read “Uh oh, these things always backfire. #gohawks MT @HuffPostChicago: Are u as confident in @NHLBlackhawks as THIS guy?” The Chicago Blackhawks ended up winning Lord Stanley’s Cup, making the tattooed gentleman correct, but the Vermont Governor never explained his #gohawks tweet. A mystery for the ages.

In another sports-related deletion, Rep. Bruce Braley, D-Iowa, deleted a tweet with an ill-advised hashtag during March Madness that said “It’s official. Ohio State is the luckiest team in the tournament. #TrailOfTears.” Soon after a number of Twitter users voiced their irritation at the congressman invoking the forceful removal of the Cherokee people in the 19th century, Rep. Braley deleted his tweet and apologized. His explanation was “The “tears” I was referring to were the tears of Cyclone fans. I have removed the tweet & apologize to anyone who was offended.”

As politicians and their staff become increasingly equipped with powerful mobile devices, it is inevitable that they will waste some time on games. Games are fun and politics are not always so, especially with long travel distances and endless floor speeches. Sen. John McCain, R-Ariz., was caught playing poker on his phone during a hearing on Syria by the Washington Post (and defended himself), but a number of politicians were unfortunate enough to out themselves by tweeting about their habits from their public accounts.

Rep. Peter King, R-N.Y., recently shared that he was “Having fun with CLUMSY NINJA for iPad!” and in April, Rep. Jerry Nadler, D-N.Y., deleted two tweets from the Angry Birds Star Wars game that said “No more training do you require. Already know you, that which you need. #AngryBirdsStarWars” and “Blue Two standing by. #AngryBirdsStarWars.” Soon after the deletions he tweeted “Apologies – I’ve regained control of my Twitter account from angry bird.” Rep. Martha Roby, R-Ala., shared a rather confusing tweet from the Wreck-It-Ralph phone game that said “I scored 3934 points on Flight Command in Wreck-it-Ralph iOSkknnnnnbbnn. N jmjmmkkkkinjn mnmmjfrfg ncfhi.” She eventually gave the credit for that tweet to her four year old son, George, who borrowed the phone.

The official account of Rep. Mike Rogers, R-Mich., who was a co-sponsor and major supporter of the controversial Cyber Intelligence Sharing and Protection Act (CISPA), deleted a retweet of an analysis by MapLight of contributions to lawmakers from pro-CISPA companies. Rep. Rogers, or a staffer running the account, deleted the retweet after 23 minutes that said “House Intelligence Committee have received, on average, 15 times more money in campaign contributions from pro-CISPA organizations than from anti-CISPA organizations” and the Sunlight blog post on the deletion was picked up by Boing Boing, Techdirt and others.

In the midst of the government shutdown in October, news broke of a chaotic car chase that ended near the Capitol with police shooting the unarmed driver. The reports of gunfire were immediately shared by Rep. Tim Griffin, R-Ga., who reported from the House cloakroom and a minute later tweeted (and later deleted):

The deletion was written about in the Washington Post, MSNBC, Slate and other outlets. Rep. Griffin responded in a statement to USA Today addressing the deleted tweet that he “tweeted out of emotion, but agree that the timing was not helpful.”

Later in October Rep. Linda T. Sánchez, D-Calif., or a member of her staff shared the behind-the-scenes image seen to the right in a deleted a tweet that read “At Ways and Means Caucus meeting working on strengthening Medicare. So many acronyms so little time. #SGR.”

No social media report would be complete without a few cute pets and Politwoops is no exception. Gov. Deval Patrick, D-Mass., or someone on his staff deleted a happy Halloween wish to his followers with a picture of a dog named Woody wearing a cowboy hat. Elsewhere in Massachusetts, Rep. Jim McGovern, D-Mass., deleted a tweet about liking a video called “Kittens Conquer The Stairs, HEROES.”

For the most recent notable deletion, Sen. Tom Cobrun, R-Okla., removed a tweet on Monday that read “#Wastebook2013 sneakpeek: $1B wasted on @TSA anti-terrorism behavioral detection that hasn’t ID’d a single terrorist” and included the image seen to the left. Despite the excited sneak peek, the official release on Tuesday and the full Wastebook 2013 lacked any mention of this TSA program and figure.

Politwoops continues to be a valuable resource for journalists and citizens alike, with dozens and dozens of media mentions rolling in throughout 2013. The project was the basis for a Washington Post TV segment, articles in USA Today, CBS News, Politico, the Atlanta Journal-Constitution, The Hill’s Twitter Room and In The Know columns, the Houston Chronicle and many others.

All statistics and rankings were calculated this morning at 10 a.m. thanks to the incomparable technical skills of Drew Vogel. Thank you to my fellow moderators, Evan Mackinder and Louis Serino, and of course all the politicians who graciously contributed to the project by deleting their tweets. We look forward to what new content you come up with for 2014!