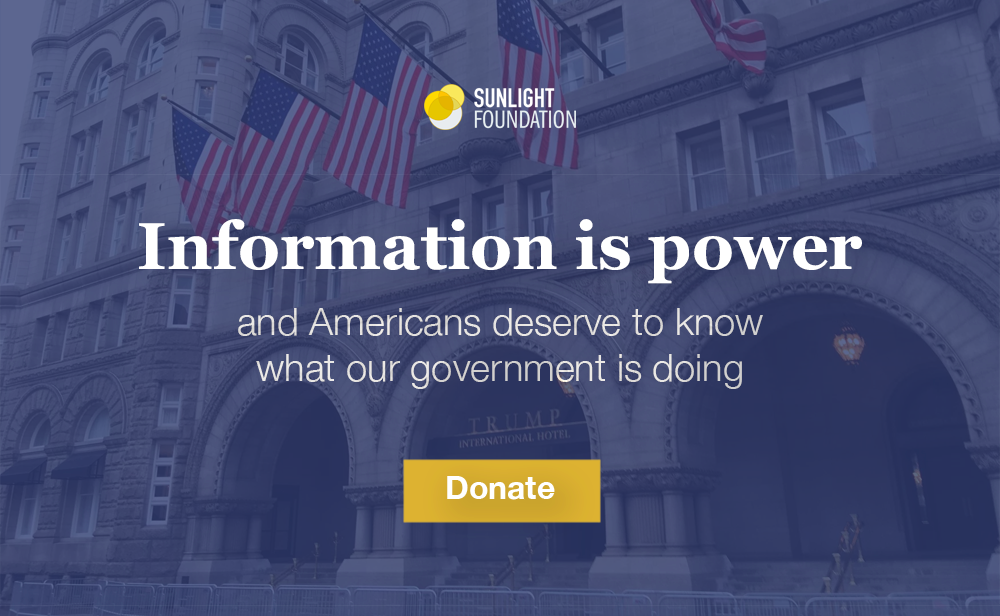 Note: This post is the third in a series of year-end fundraising emails. Check out the first post in this series by deputy director Alex Howard and the second post from Open Cities director Stephen Larrick, and consider donating to support our work today.

In my 10 years at the Sunlight Foundation, I have never experienced a year like this one.

In 2017 President Trump made unprecedented and dangerous threats toward journalists, foreign governments, federal agencies, judges, individual Americans, and the foundations of democracy as we know it.

With these actions, Trump is injecting a new antagonism towards accountability and democracy into American politics. He still has not released his tax returns, and his financial interests that we do know about create glaring conflicts of interest, both at home and overseas. The White House now hides its visitor logs. Trump vilifies journalism itself, and works to create a public discourse where ego replaces evidence. The list goes on, as we have documented in the Trump administration’s record.

Of course, our country’s problems run deeper than the attitudes of one man, regardless of his position. Americans are increasingly at odds with each other, and our political institutions are straining under an intensifying tribalism. Eroding norms and democratic instability are giving us all new perspective on what we take for granted, and where civic life needs new support to thrive.

Trump’s presidency and the political realignment that is accompanying it have arrived at a time when Sunlight’s corner of the nonprofit sector has also been undergoing big changes. Many organizations have seen evolutionary changes in their funding, missions, and tactics. Sunlight has been no exception.

Sunlight is proud of the legacy of our technology work, as former Sunlight staff hold leadership positions throughout government, media, and allied organizations. Thanks to our allies, many tech projects that began at Sunlight empower journalists and advocates every day.

Despite this upheaval, Sunlight has remained a consistent voice for transparent and accountable government in Washington and in cities across the country.

Leading journalists and media outlets around the world look to Sunlight for a credible, independent voice. Elected officials and staff from Congress to city halls across the country work with Sunlight to help create a more transparent accountable government.

Increasingly concentrated wealth, in an increasingly deregulated campaign finance system, feeds into a politics of mistrust, which is often amplified further by the our new, digital discourse, at the same time as an explosion of available data. This dynamic is spurring us all set new directions for public policy.

Sunlight remains, as Justice Louis Brandeis wrote, among the “best of disinfectants,” perhaps now more than ever.

In 2017, Sunlight worked with hundreds of journalists to help the public understand Trump’s presidency and the new risks facing our system. We repeated our call to release his tax returns, tracked his potential conflicts of interest and gag orders, and denounced the president’s actions to undermine basic democratic values, from press freedom to public participation.

And Sunlight has partnered with leading organizations to bring inspiring, experienced voices from overseas to share their experiences defending democracy back to the United States. By turning the typical model on its head, we will help U.S. advocates and journalists learn from experts abroad who have fought corruption, nepotism, and threats to democratic freedoms for decades.

I am so proud of what Sunlight has accomplished this year.

In the year ahead, Sunlight will continue to stand up for the values we share. Transparency and accountability are fundamental to American democracy, and they’re not going anywhere. Sunlight will also likely grapple with even harder questions as our country evolves.

As advertising and civic discourse moves online, how do we make paid influence transparent on public squares owned by private companies? In a country divided by increasing tribalism, how do we create the kind of systems that help us engage with one another participants in a shared democracy? And how do we ensure that the government earns our trust?

As Americans, we all deserve to know what our government is doing and why. I am grateful to you for your support of Sunlight’s work. If you would like to take your role to the next level this year, donate to support transparent and accountable government today.

Thank you for all that you do.