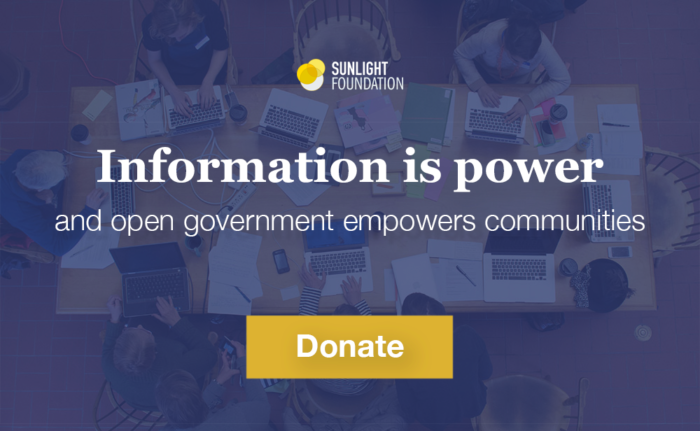 [Editor’s Note: Our leadership is sending emails to our community at the end of this year making fundraising appeals. We wanted to make sure everyone could see them and, if inspired, give. If you’re still finishing your holiday shopping, you can support Sunlight’s mission at AmazonSmile, which donate a portion of your eligible purchases directly to us. The first message, by deputy director Alex Howard, is below. Look for posts by Open Cities director Stephen Larrick and executive director John Wonderlich in the days to come.]

Back in March, as the nation was only beginning to understand President Donald J. Trump’s disregard for facts, transparency, and the role of journalism in democracy, the Washington Post added a short, poignant new motto to its front page.

Every day when I read the Post, this phrase reminds me of how important journalism and freedom of the press are to maintaining democracy and pushing back against the darkness represented by closed government. In many ways, the phrase also captures why I joined the Sunlight Foundation last spring, after working as a journalist for nearly a decade. I was excited to join an organization that has been at the leading edge of a global movement to open governments to the people they serve. After the past year, our work has never felt more vital or more needed.

Sunlight’s mission is to fight the darkness of closed government.

To say that the Trump administration is neither transparent nor accountable is an understatement, as our report on the administration’s record of open government at six months showed. While President Trump’s use of Twitter is unprecedented, it’s not clear who writes those tweets and his statements there are not trustworthy. In fact, the President of the United States makes an average of five misleading claims each day, across platforms and podiums. While his delegitimization and verbal attacks on journalists are dangerous and provide cover for autocrats to crack down on journalists across the world, the actions of the administration are also shrouded in shadow. Government transparency is needed now more than any time in our history—and we need your help in the new year to shine a light on what’s happening

Protecting and defending journalists and the journalism they provide enables nations to emerge stronger from the challenges that threaten democracies. This year, we were proud to work with journalists around the United States and the globe to provide context, clarity, and information to hold governments accountable. In the year ahead, we will help fight for a federal shield law in Congress.

Since last November, we have tracked President Trumps’ conflicts of interest, showing the numerous ways he is potentially profiting from the presidency. We found more than a thousand conflicts for the First Family, raising concerns over foreign policy and undermining anti-corruption efforts globally. In 2018 we plan to expand this work, as even more of the Trump family’s conflicts of interest come to light.

We have documented reductions to public information online, including data the Trump administration has deleted from federal websites, shedding light on how Americans’ access to our knowledge has been curtailed. That work will continue in 2018, including pushing for better laws and policies that ensure public information isn’t taken from public view without public warning.

We’ve continued to push for more action from Congress and agencies, working on both legislative and regulatory reforms to improve lobbying disclosure and defend ethics in government. When Congress asked us how disclosures and disclaimers for electioneering should work online, we helped draft the Honest Ads Act, which would bring much-needed transparency and accountability to paid political advertising. In 2018, we’ll continue working with Congress to turn that bill into law, along with making open government data the default in the United States government.

Sunlight will do more to defend and strengthen our democracy in the year to come, but we need your help to do it.

Over the past year, I’ve had the incredible honor to represent Sunlight in cities and nations around the world. I’ve been humbled and inspired by the extraordinary work and commitment of our partners and allies, and to be part of a growing community of people using the ideas, principles and practices of open data, open source, open journalism, and open government.

Thank you for everything you’ve done this past year.  As 2017 comes to a close, I hope you’ll help open governments in the year to come by making a donation to Sunlight today.