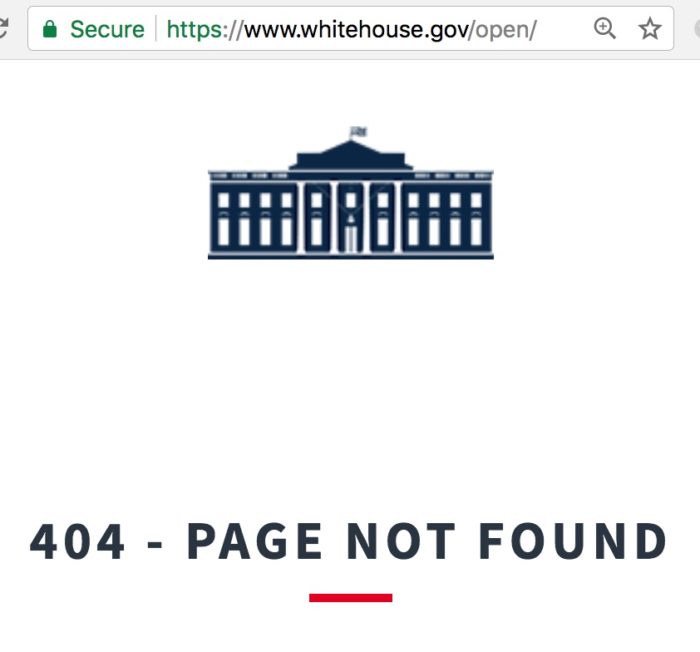 Over the past year, transparency, accountability and ethics have become less of a priority across the United States government.

On his first day in office, President Barack Obama signed the Memorandum on Transparency and Open Government, stating that “openness would strengthen our democracy and promote efficiency and effectiveness in Government.”  Sunlight’s research on the Obama Administration’s performance on transparency and accessibility, however, found that the outcomes fell short of the high expectations that followed the 2008 election. President Obama left office with a mixed record on open government.

During the Trump administration, however, the Open Government Initiative, Open Government Partnership, and related programs, initiatives and partnerships across the federal government are being ignored, neglected or even forgotten in federal agencies.

Notably, the Trump White House is not leading by example. When the whitehouse.gov redesign went live in late 2017, the Office of Management and Budget and the Office of Science and Technology Policy still lacked /open pages, a notable void given the leadership role that the White House has traditionally held in domesti and international open government initiatives, management, and oversight of them.

Under Trump, cross-agency open government coordination and development of a fourth National Action Plan for the Open Government Partnership, a multilateral initiative launched in 2011, has shifted out of the White House to the General Services Administration, which now maintains open.usa.gov. In October 2017, after a short, flawed public consultation, the White House Office of Management and Budget delayed development and publication of the new plan until “early 2018,” a deadline that was then pushed further to August 31, 2018.

New @USGSA statement: 1) the US government postponed a scheduled @OpenGov meeting tomorrow: https://t.co/MXvbYBazIS 2) @opengovpart changed the cohort the US is in, which means 3) The 4th U.S. National Action Plan on #OpenGov is no longer late; new deadline is August 31, 2018 pic.twitter.com/bomCgiFLg8

In January 2018, Sunlight conducted an audit of compliance with President Barack Obama’s 2009 Open Government Directive, which requires agencies to create and publish a plan, and to disclose open data sets.

The executive order, which is available on WhiteHouse.gov, required agencies to take four steps towards open government:

One of the basic requirements of the Open Government Directive was that agencies must publish an open government plan on their website at a /open page. In late 2016, Sunlight found that only half of the cabinet agencies had complied with this requirement. As of January 2017, 92 percent of federal agencies subject to the Chief Financial Officer Act had complied with this same requirement, along with publishing progress report and self-assessment – with the notable exception of the Department of Veterans Affairs.

Where does the Open Government Directive stand? 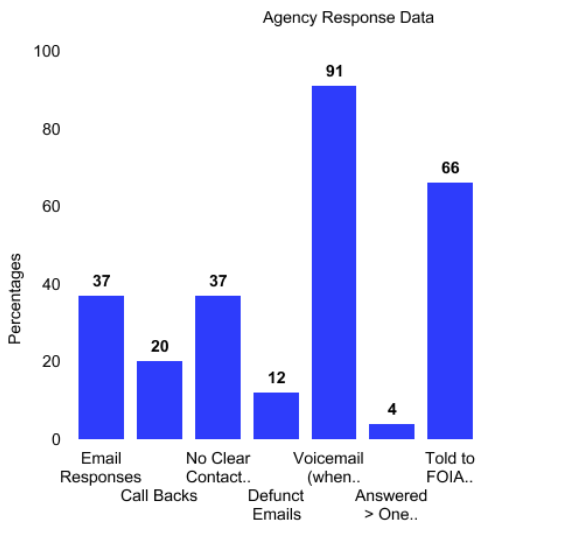 To set a new baseline for our audit, we attempted to contact each of the 24 agencies covered by the Chief Financial Officers Act, which are legally mandated to comply with management directives from the White House, and asked each agency several questions about open government

We not only wanted to gather information on what agencies wanted to improve moving forward, but we also wanted to see how accessible gathering this information would be. Unfortunately, our attempts to contact these agencies for two weeks during January 2018 found low response rates and few proactive disclosures, as you can see in the spreadsheet documenting our reporting embedded below.

What did we learn?

Our reporting informed several conclusions about the status of the Open Government Initiative in the Trump administration.

First, in January 2018, all of the 24 CFO Act agencies continue to publish open government plans and retain their /open webpages. (Many non-CFO Act agencies, which were not required to create such a page, do not retain them.) Many agencies /open pages, however, still link to that missing White House /open webpage.

Second, the presence of plans or pages didn’t always reflect the agencies’ demonstrated commitment to open government. We found agency staff to be either unaware of the plans or programs, or unwilling to talk about them. No agency answered all of our questions.

Third, over the past year, many agencies aren’t communicating about their open government and FOIA to the public. We found that the public is faced with renewed barriers to receive information about their government of which they are entitled to access.

Fourth, 100 percent of Cabinet and CFO Act Federal agencies continue to have online FOIA reading rooms, as mandated by law. Many of these FOIA reading rooms, however,  are still not being regularly updated. These reading rooms may contain anything from previously released records to agency manuals and policy statements.

Fifth, the people charged to provide public access weren’t responsive to our information requests.  When we called public FOIA officers/liaisons for the first time, we reached voice mail 91 percent of the time, and then received a callback 26 percent of the time. Of those callbacks, just 20 percent our answered questions regarding 2017 FOIA statistics, which the Department of Justice asks agencies to disclose every quarter.

Finally, the FOIA officers and public information officers that did respond referred our inquiries to other staff, who in turn passed off the baton to someone else, who subsequently did the same.

Overall, our reporting found a demonstrable shift in the importance of open government plans, initiatives and public disclosure from the Obama Administration to the Trump Administration.

The lack of accountability at the Department of Veterans Affairs (VA) is symbolic of this problem. In 2016, after Sunlight highlighted the fact that the VA hadn’t updated their plan since 2010, the agency committed to restoring data and producing a new open government plan. This promise was not kept and has yet to be remedied.

In its first year, the Trump administration’s record on open government has fallen far short of the standard for ethics, transparency and accountability that should exist in American democracy, undermining anti-corruption efforts worldwide.