The City of Madison, Wisconsin has published 136 datasets on its open data website since its launch in 2012. After some initial projects with the local civic hacking community, however, this data has gone relatively unused by community groups.

In 2016, Madison worked with Sunlight and the Johns Hopkins Center for Government Excellence to refine its open data governance as part of What Works Cities. At the end of that process, Madison’s open data team wanted to do more to facilitate the community’s use of open data for impact. That’s why they became the third pilot of Sunlight’s Tactical Data Engagement (TDE).

Around the same time, two other significant discussions were going on in Madison. The first issue was that the city was in the midst of updating its comprehensive development plan. Imagine Madison asked residents how they want the city to grow. Over the course of more than a year, residents made it clear clear that “affordable housing in corridors with access to transit, schools, parks, libraries, neighborhood centers, and other amenities” were an important priority for them.

The second issue was racial inequality in the city and how to repair it. In 2013 the Wisconsin Council on Children & Families found that Madison is home to some of the biggest racial disparities in the nation. Most black families live in a small handful of neighborhoods – and these neighborhoods typically lack “a full service grocery, a public school, social or civic clubs, developed open spaces, a bar, restaurant, or a significant employer.” Madison acknowledged this finding in its comprehensive plan with an explicit goal of addressing “current structural and institutional inequities for our communities of color and other disadvantaged groups.”

Madison’s open data staff recognized how important the Imagine Madison process was for the city. So, they asked Sunlight to help apply a TDE approach to see how open data could support equitable and complete neighborhoods.

In November 2017, Sunlight and social impact firm Reboot set out to understand Madison’s current and potential users of open data — particularly those working on issues related to public access to services and community spaces, transportation, and housing. Reboot’s design-research experts helped to conduct in-depth research on local data needs and construct user personas. We wanted to understand the information needs of community members, their perceptions of open data in general, and how they currently use Madison’s open data services specifically. Our goal was to identify opportunities for the City of Madison to help community groups working on neighborhood development issues use open data to advance their work.

To answer these questions, we held a focused research sprint in Madison. We conducted interviews with 36 people who work on neighborhood issues in the city, including local activists, city librarians, planning staff, direct service non-profit leaders, and business owners. We tracked themes within their interview responses, looking for patterns to see where the city’s open data resources would be most useful. 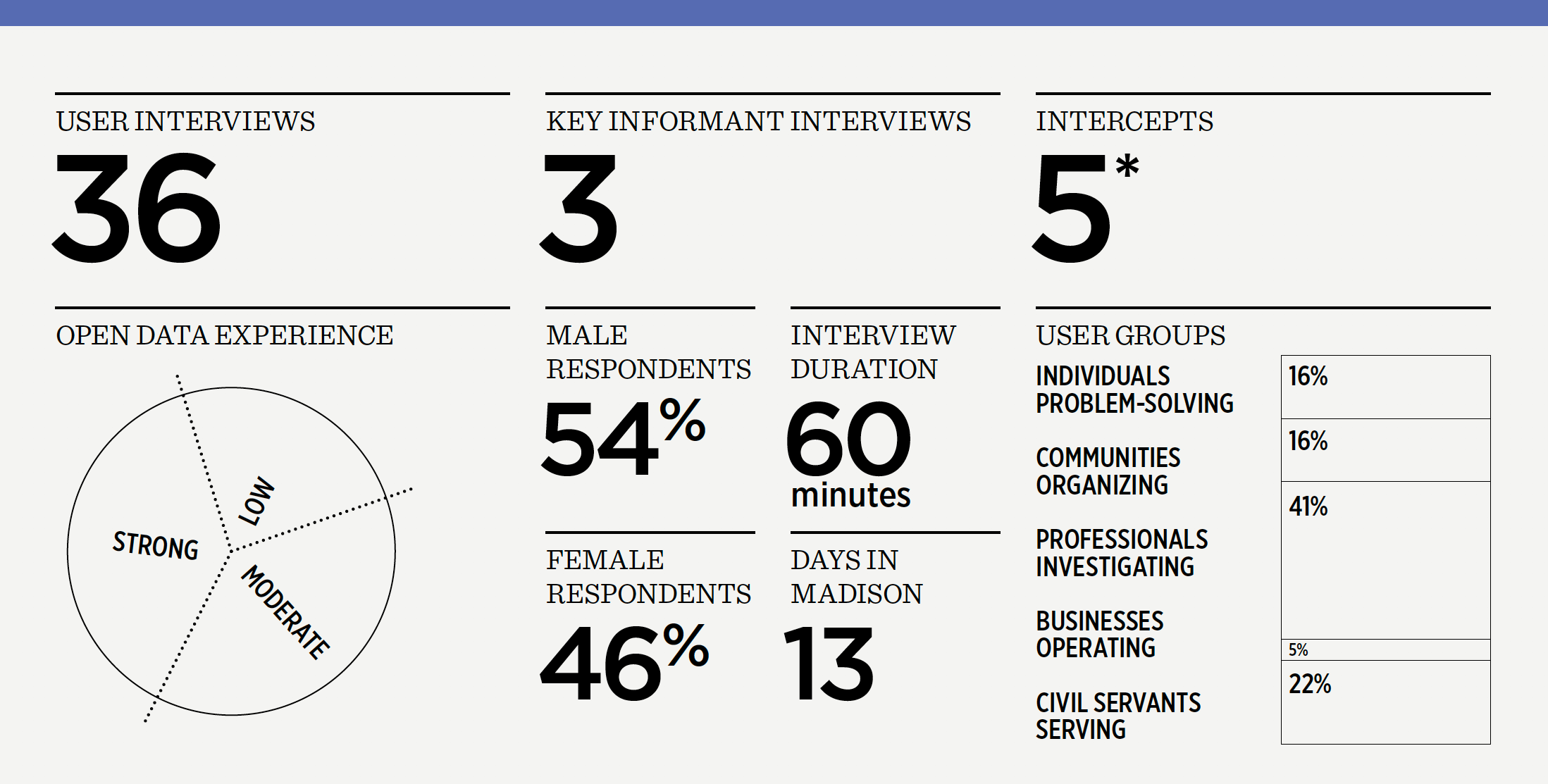 The results of this research ultimately informed our creation of six personas of potential users of Madison’s open data. Together with Reboot, we identified themes from across interviews and aggregated them into composites to help Madison’s staff understand the audience for city open data. Each persona includes a target industry and occupation, a set of unique skills that person likely has, who is in their social network, their “data diet,” and common ways that they interact with the city. See the detailed user personas and journeys, or read our full report to the City of Madison.

Our full report also includes recommended ways the city can support data use with social impact in general and on equitable neighborhood development specifically. In the next step of our engagement with Madison, Sunlight will help the city design a plan for action and then implement an intervention.

While our engagement with Madison will focus on one specific opportunity, this process is showing the city’s team how they can better connect to the information needs and experiences of residents in the future. As Madison continues to support opportunities for the community use of data, either around complete neighborhoods or other issues in the future, we hope city staff will remain engaged and enthusiastic about resident engagement around open data.

Our work supporting complete and equitable neighborhoods in Madison is one of three TDE pilot projects that are currently in progress. Last week, we shared a look at the other two, helping the City of Glendale, Arizona with its Development Services information as well as procurement practices.

Read the full discussion of our TDE pilot project with Madison to learn more about how our Tactical Data Engagement approach is working in Madison – and how your city could use this idea to increase the social impact of open data in your own community.