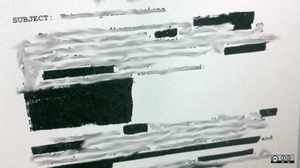 Today, President Donald J.. Trump approved the release of a controversial memorandum drafted by Republicans on the U.S. House Intelligence Committee. The House has now published the memorandum online.

Let’s be clear: the selective declassification of this memorandum — but not the one drafted by Democrats on the committee – is an indicator of bad faith on open government, not a commitment to fully informing the public about how surveillance is used, abused or authorized in U.S. government.

This is part of a disturbing pattern of weaponized disclosure in this presidency, going back to the campaign itself. As a candidate and president, Trump has supported transparency for his political opponents or for institutions that threaten him, not an open government for the people.

It’s hard not to smell some hypocrisy on transparency and democracy in DC today.

How many of the Members of Congress speaking out about “transparency” this week have said anything over the last year about White House visitor logs, secret ethics waivers, FOIA denials, openness for that presidential “voter fraud” panel, or the tax returns of the president?

If the contents of this memorandum documented violations of civil liberties or issues around transparency regarding surveillance, why didn’t the Members of Congress vote to reform Section 702 rather than reauthorizing it?

“Full transparency” is not the selective disclosure of information with the transparent goal of delegitimizing the Office of the Special Counsel and the FBI’s investigation of President Trump’s campaign.

Full transparency would include not just the release this Nunes memo: it would mean releasing the memo from the Democrats on the committee, the underlying intelligence it’s based upon, the applications for and renewals of relevant FISA warrants, going beyond the requirements of the USA Freedom Act to disclose all secret laws and interpretations at the Foreign Intelligence Surveillance Court, or the number of Americans whose papers are being searched without a warrant.

Sunlight has never been afraid to call out presidents of either party, nor decry secrecy at any level of government. We won’t hesitate today.

Until we see comprehensive disclosures that are aligned with reforms to improve oversight of intelligence, the use of “transparency” in Washington in this context should be viewed through a partisan lens, not cited as a good faith effort to uphold the American public’s right to know what is being done in our name.