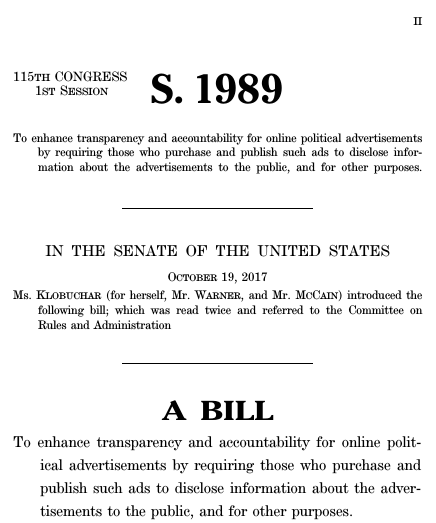 This afternoon, Facebook founder Mark Zuckerberg is testifying on data privacy and protection before a joint session of the U.S. Senate Commerce and Judicial Committees.

What a difference an international data scandal makes.

In his prepared remarks, Zuckerberg specifically spoke to Russian interference in the 2016 U.S. election, Facebook’s transparency proposals in response, and support for the Honest Ads Act. Previously, Zuckerberg had also announced “several new authentication requirements for ads and Pages.

Months after declining to endorse the Honest Ads Act during their testimony before Congress, Twitter has also endorsed the bill, which would add much-needed transparency and accountability to online political ads., and to more transparency for ads overall. We looks forward to working with Twitter’s policy team, the Federal Election Commission, and Congress on better informing the public

Twitter is pleased to support the Honest Ads Act. Back in the fall we indicated we supported proposals to increase transparency in political ads.

While Google has been working on adding a public political ad file to its transparency reports, it has not publicly come out for the bill, which has bipartisan, bicameral support in both Houses of Congress.

Facebook’s opacity in Seattle has shown why self-regulation is not enough.

That’s why we worked with Congress last year to draft a meaningful update to our laws that would address a specific problem: the growing online disclosure cliff that Sunlight has warned of for years.

There needs to be a level playing field for transparency and accountability online for all of the Internet platforms, and that can only come with Congressional action.

If Snapchat begins running ephemeral paid political ads this fall, there should be a public file. In the years ahead, we expect telecommunications companies like AT&T and Oath to explore serving geolocated, personalized political ads to consumers.

That’s why the Honest Ads Act would be a necessary step that should be considered and voted upon separately from any data privacy, protection or ethics reforms.

The bill doesn’t just address disclosures and disclaimers for online political ads: it updates the U.S. Code to make it clear that electioneering — and the rules and regulations that surround it — includes communications on online platforms that aren’t being called to testify before Congress.

The Honest Ads Act also cannot be the end of Congressional action on reforms, given the global headwinds that political transparency faces online and off.

This bill does not address emerging challenges for open government, from automated activity to algorithmic transparency to public speech on private platforms, nor legitimate questions about data ethics, privacy, protections, anti-trust concerns.

It is, however, a start, and we’re glad to see more support for it among the companies it would regulate.