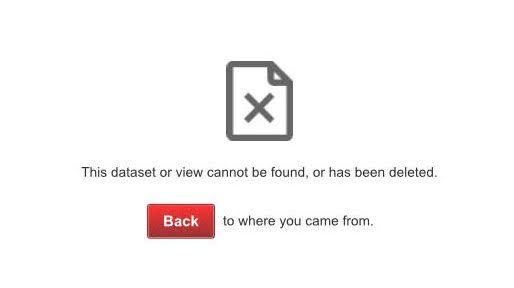 To engage in a monumental understatement, it’s a big deal for the public’s information to be altered or disposed of without justified intention and public notice of the removal. In spring 2018, for the first time the National Archives and Record Administration (NARA) has begun using the Internet to inform the American public about its ongoing investigations of unauthorized dispositions in an online dashboard. In a year that continues to be marked by regression on transparency and accountability under the Trump administration, this is a welcome development that shines a bright light on a matter of significant public concern and shows continued commitment by NARA to its open government plan.

“For many years in the Performance Accountability Report, we have included a table of all open and closed cases by financial year, but it was available only as an end-of-the-year snapshot and not as a real-time, ongoing tool that we have now via the website,” Laurence Brewer, chief records office of the United States, informed Sunlight in an email.

For those unfamiliar, “unauthorized disposition” refers to the unlawful or accidental removal, defacing, alteration or destruction of federal records under 44 USC 3106 and 36 CFR Part 1230.

This section of the U.S. Code requires federal agencies are required to “notify the Archivist of any actual, impending, or threatened unlawful removal, defacing, alteration, corruption, deletion, erasure, or other destruction of records in the custody of the agency.”

The Archivist and NARA staff constantly monitor the media, nonprofit watchdogs like Sunlight, and feedback from the general public for potential unauthorized dispositions. (You can contact NARA at UnauthorizedDisposition@nara.gov if you are aware of a potential records issue or want more information.) NARA’s Records Management Oversight and Reporting Program is responsible for establishing case files as it investigates allegations, including communications with a given agency until the issue is resolved.

“Our goal is to close cases as quickly as we can, however, some cases are complex in nature or under litigation,” said Brewer. “NARA currently has fifteen cases that have been open 365 days or more.  NARA has been actively working on our older open cases. Since last year, we have closed thirteen cases that were open for a year or more.  NARA spends a considerable amount of time reviewing the background information on each legacy case and in some cases, restarting dialogue between NARA and the agency, which may include escalating to the Senior Agency Official for Records Management.”

The new NARA dashboard, which is updated monthly, lists open and closed unauthorized dispositions, including open and closed letters for each, where they are available or — crucially — are permissible to disclose. NARA suggests that the public contact its Freedom of Information Act Office using a case ID. Once a given case is closed, NARA moves it to an  Unauthorized Dispositions Closed Cases page. A list of the cases that were open and/or closed prior to 2016 is available to the public online in past Performance Accountability Reports.

We’ve embedded a sortable spreadsheet of the investigations that NARA had open as of the end of March 2018 below. For the most current status, consult NARA’s webpage.

When asked about NARA’s capacity to investigate unauthorized dispositions, Brewer told Sunlight that the program currently has four staff who manage and track these cases, and one supervisor who reviews open and close correspondence and performs quality assurance on the monthly reports that are provided to him and agency records officers.

According to Brewer, NARA has not referred cases to the U.S. Attorney General for resolution, but if cases be litigated, NARA does consult with the Department of Justice.

“Referrals to the Attorney General are limited to cases where there is an unlawful removal of records where recovery is of prime importance,” said Brewer. “The involvement of the Attorney General is covered by 36 CFR 1230.18 and is less common than accidental destruction, deletion or loss.“

The future of federal Web integrity

As we have highlighted since January 2017, unannounced federal webpage and website removals have created significant public concern, doubt and confusion about the status of public information online and access to it.

Last February, we stood with a coalition of 69 public interest organizations in calling on agencies to provide public notice before removing information from federal websites.

Unfortunately, the question of how statutes governing unauthorized dispositions relate to the removal of public records online continues to be clouded or in contention at agencies.

When Sunlight has inquired about the changes to federal websites that our Web Integrity Project has documented, federal agencies have quoted NARA’s outdated guidance on Web governance policy to us as evidence that have met their obligations.

Last year, NARA told us and the public that it was revisiting and revising its 2005 Web governance policy, but it has yet to be released as draft for comment. As we, the American Library Association, and OpenTheGovernment explained in a letter last year on improving management of federal Web records, we hope to see that update explicitly include proactive public engagement that provides explanation and narration of updates, downtime or removals.

In the meantime, we continue to support a government data integrity bill as a means to create more certainty in the continued availability of open government data and a mechanism for public notice before any removals or takedowns occur.
Web Integrity Project
Home
Website Monitoring
Web Governance Policy
For Journalists
Publications
Get Involved
About WIP
Subscribe