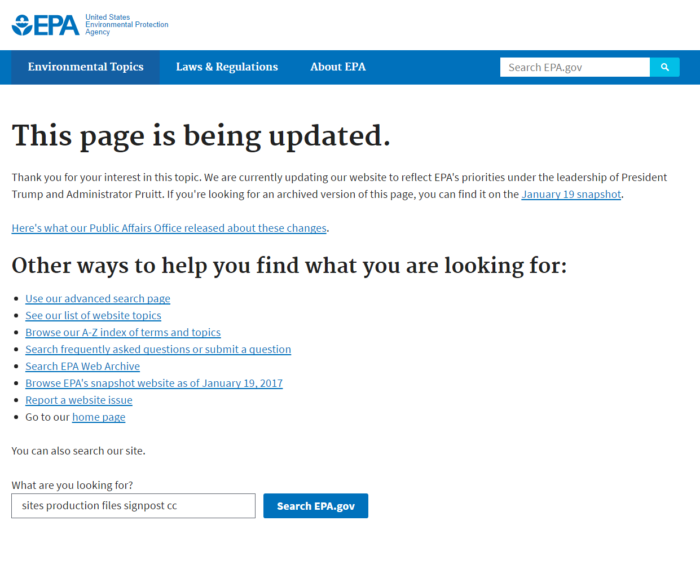 Since President Trump’s inauguration, we’ve been part of a team that uses a website monitoring platform to track changes to about 25,000 federal government webpages. Our Website Monitoring working group at the Environmental Data & Governance Initiative (EDGI) researches and reports on alterations to content, data, and resources related to environment, energy, and climate, and changes in access to those websites and their hosted data and resources, yielding an ongoing series of reports about the changes we’ve seen.

Over the past seven months, we’ve seen changes to federal agency websites, including at the Environmental Protection Agency (EPA), the Department of Energy (DOE), the Department of the Interior, and the State Department, as well as changes to the White House’s website. These updates include changes to websites that provide educational information, insight into the obligations and past actions of agencies, plans and work toward upcoming policy, and access to and context for government documents. These sites have spanned topics like climate change, renewable energy, fossil fuels, clean water, agriculture, animal welfare, and general science policy. 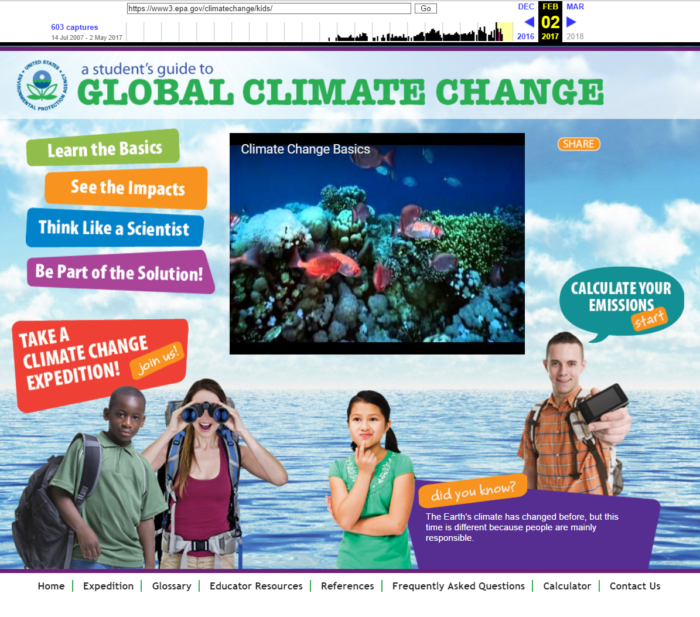 Much of what we’ve seen has been changes to the text of government websites, altering wording, program names, or entire sentences and paragraphs, but leaving the structure of the website intact. Shifts in language across various agency websites have often downplayed the significance of renewable energy in favor of fossil fuels, increased emphasis on job and economic growth, and removed references to climate change.

For example, the DOE’s Office of Technology Transitions renamed its “Clean Energy Investment Center” to “Energy Investor Center” and removed all mentions of the term “clean energy” from its website. The EPA’s “Climate Ready Water Utilities” website was renamed “Creating Resilient Water Utilities” and all 19 mentions of the word “climate” were removed from the website’s homepage.

We’ve also seen substantial changes that have reduced public access to government Web resources and documents. These shifts have included the alteration and removal of hyperlinks, the removal of entire webpages and documents, and the restructuring of entire portions of websites. 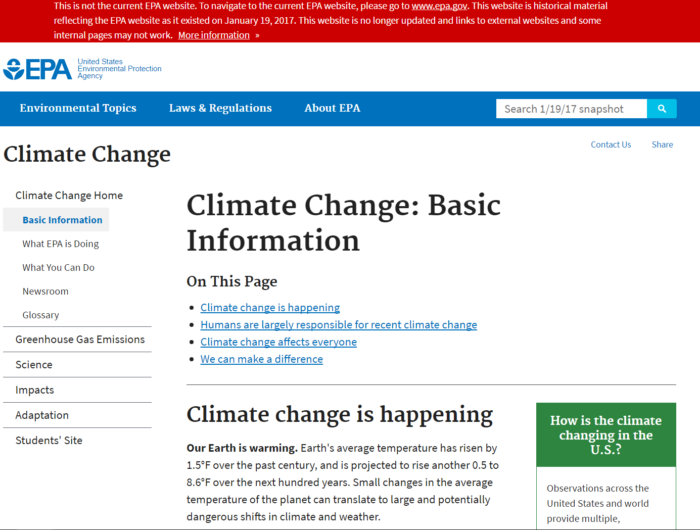 For example, the Environmental Protection Agency removed large portions of its climate change website, establishing a redirect from climate change pages to a notice page stating that the “page is being updated” and significantly reducing the public’s access to information. Much of the website remains archived on EPA’s January 19 snapshot. Certain components, however, such as the Student’s Guide to Global Climate Change website, were not stored in the snapshot and were made completely inaccessible as a result of the overhaul, likely due to technical errors.

The State Department’s Office of Global Change removed the Climate Action Reports from their website, obfuscating United States commitments to international climate action. These reports are produced as a national obligation under the UN Framework Convention on Climate Change to evaluate United States emissions projections based on current energy policy and detail actions the nation is taking towards mitigating climate change harms. (The Trump administration notified the UN of its plans to withdraw from the Paris agreement on climate change on Friday.) 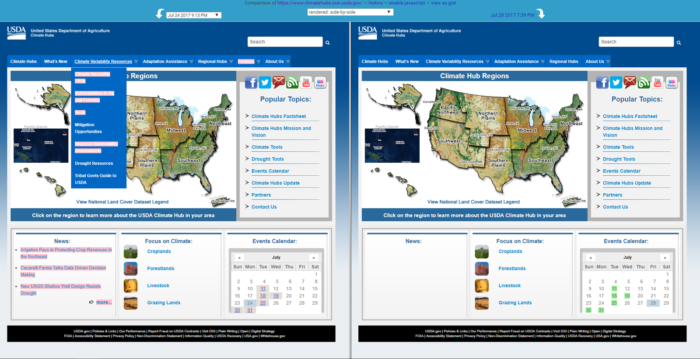 Recently, the U.S. Department of Agriculture removed content and pages from its Climate Hubs website for five days, without explanation. Removed links to PDFs containing factsheets, regional agricultural assessments, and data visualizations across the website rendered those documents inaccessible. The website does not seem to be stored on a publicly accessible Web archive, meaning there was no place content could be accessed while the site was down. It will also be an issue in the future if archives are not put up prior to the planned overhaul of the website.

While we have seen substantial changes to federal websites, we have not seen removals of open data, with the exception of the series of datasets on animal welfare from the USDA. Following public outcry and several lawsuits, the USDA has put some of the open data removed during the Trump administration back online.

As we explained in our introductory blog post, our fellowships at Sunlight are focused on contextualizing this work, creating a vocabulary and classification system for the changes we’ve seen, and exploring how to expand to monitor websites and data beyond environmental and scientific agencies. We look forward to continuing to engage with the press and the public to understand how we can better provide context for these changes and promote government accountability.