When Sunlight launched the Web Integrity Project (WIP) almost two years ago, we created an innovative way to hold federal agencies to account for the content on their websites, as envisioned by our founding supporters, Toly Rinberg, Andrew Bergman, and Rachel Bergman. 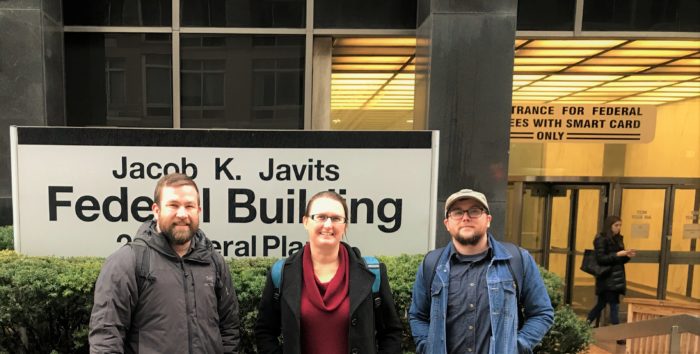 Fast forward to today, and WIP monitors tens of thousands of federal government webpages each week, has reported on and sourced hundreds of stories about federal websites, has provided materials for congressional oversight, and has engaged with the executive branch and watchdog community on web integrity issues. As a result of our efforts, federal agencies may be paying better attention to their websites and are more aware that people are watching.

In today’s America, where government websites are “the primary means by which the public receives information from and interacts with the Federal Government,” web monitoring is profoundly important at the beginning of each new administration. In the intra-agency tumult that prevails just after the inauguration of a new president, there is much potential for useful and relied-upon content to be lost and for political machinations to dominate. Many of the most significant website changes that we’ve seen at the Web Integrity Project happened within the first few months of the new Trump administration, like the removal of climate change resources from the EPA’s website, ACA-related content and pages from the HHS website, LGBT resources from the Department of Labor’s website, or the staff directory from the Office of Refugee Resettlement’s website.

With that track record of accomplishments in mind, we announce that the Sunlight Foundation will be shutting down WIP as of today. While we were unable to secure continued financial support for the program, we want to ensure that our work lives on online, true to the values of the program, so we are ensuring that our reports, the Gov404 tracker, and our blog posts are properly archived using the Internet Archive’s Wayback Machine.

As we reflect on how much we’ve enjoyed our work of the last couple of years, we wanted to share some of the things we’ve learned.

One of the main lessons we learned is that monitoring the web for changes can act as a kind of early warning system for upcoming policy changes. As we saw with changes to antidiscrimination language on the Department of Health and Human Services website, alterations to web content can sometimes foreshadow changes in policy. Similarly, changes made on the Department of Labor’s website likely portend rule changes that would weaken protections for transgender employees of government contractors.

Just as significantly, we have learned that our unique web monitoring approach functions as a major “tip pipeline,” which means we have had a chance to chase stories that simply wouldn’t surface in any other way. That focus on public-facing government tech helped us shine a spotlight in areas that many news organizations ignore.

When we wrote about the removal of Guideline.gov, for example — a 20 year old repository of medical guidelines that was a cornerstone of modern evidence-based medicine — it had received no attention in the mainstream press. But the importance of the story is hard to overstate. A vast trove of government funded-research, relied upon every day by medical professionals, had been shuttered with little fanfare. Similarly, our reporting on dramatic changes at the Office of Juvenile Justice and Delinquency Prevention signaled a shift that will affect millions of young people in the criminal justice system.

We have also learned that people appreciate our work. When Jon Campbell, our investigator, reaches out to sources, they often express their gratitude that WIP was willing to invest time and energy covering developments large news organizations ignore. Important as they are, neither the retirement of Guideline.gov nor the restructuring of OJJDP are likely to occupy a block on primetime cable news. Even major newspapers might not get wind of stories like these. But because we took an unusual approach to big issues — monitoring the web and seeking out leads in ways no other organization does — we turned up correspondingly unusual stories. And just because the issues we cover aren’t widely known doesn’t mean they weren’t of critical importance.

We’re especially excited by the capacity of our work can also reveal broad shifts in language across websites. Building on the work of the folks down at the Environmental Data and Governance Initiative, we’ve honed techniques that reveal semantical changes across an entire website or issue area. Using these techniques we’ve revealed the Office of Refugee Resettlement’s startling transition toward dehumanizing language when talking about the children in its care, as well as changes in reproductive health-related language on HHS.gov and LGBTQ-related language across the federal government. Uncovering these changes is important, as government websites both influence and reflect how Americans are talking and thinking about the big issues of the day.

We’re indebted to our team of dedicated volunteers who reviewed thousands of changes every week. We also owe a massive debt of gratitude to WIP’s founders, as well as the Sunlight Foundation, and our many partners.

We are hopeful that a new web monitoring project will launch in time for the next new administration, whether the incoming president is a Republican or a Democrat, to hold the new administration accountable, and that funders, volunteers, and advocates see WIP as the kind of initiative worthy of their support, time, and attention.