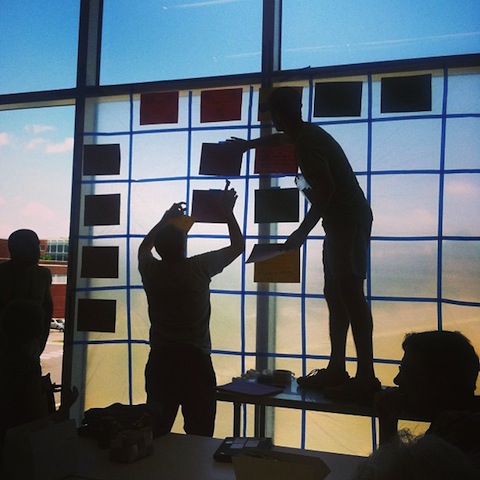 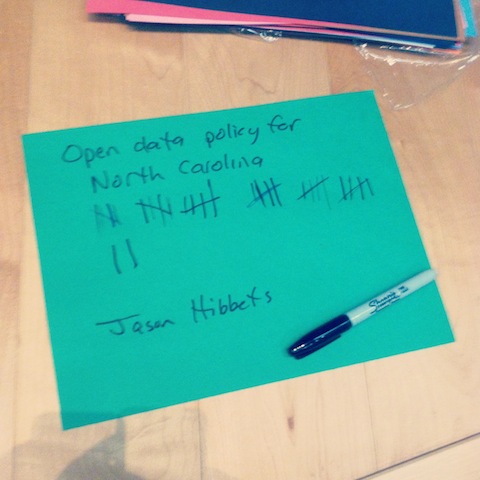 Here at Sunlight, we embrace the idea that brilliant work can grow from seeds sown during organically constructed, discussion-driven sessions — the foundation of any unconference. Our own unconference, TransparencyCamp, has itself yielded the creation of the Brazilian civic hacking group Transparência Hackers  and CityCamp, and has served for the launch pad for Waldo Jaquith’s OpenVA, a hub for new data and APIs for Virginia, AbreLatAm, an open data unconference in Uruguay, and even inspiration for Josh Tauberer’s “Open Data is Civic Capital: Best Practices for ‘Open Government Data‘”.

But what happens when the seed you are trying to plant is legislative change? How do open government unconference attendees (a mix of engaged residents, city officials, and other civic players) help make a legislative seedling grow? What next steps should be taken? Moreover, how can engaged citizens help to promote open data?

We’ve been thinking about these questions since Alisha Green and Rebecca Williams of Sunlight’s municipal team and Open States lead, James Turk, had the opportunity to sit in on an open data policy brainstorming discussion at CityCampNC in Raleigh, North Carolina, lead by open government guru and Code for America brigade captain, Jason Hibbets, and Raleigh Open Data Manager, Jason Hare. The “Statewide Open Data Policy” session was a popular and well attended one, and took place in every unconference’s coveted spot: the big room. Attendees included software developers, government staff members, members of local civic organizations, and civic hackers. It was a pleasure to see a session focused on open data policy-making because not only would the creation of such a policy directly support the work done at unconferences like CityCampNC, but because such a policy would have the chance to be made stronger by having so many of Raleigh’s relevant open data stakeholders assembled in one place at the same time. Below, we explore some of the strongest takeaways and lessons learned from approaching policy making in an unconference (or similar) setting.

The CityCampNC Statewide Open Data Policy session began their policy-making discussion by framing a desire for a statewide open data policy (as opposed to a series of municipal policies) in order to better provide for the regional needs of areas like the North Carolina Research Triangle (where CityCampNC was hosted) and provide a consistent framework for the state. Discussion of what other state policies existed commenced (Utah and New Hampshire, Hawaii in the works, California’s attempt), with eye toward the possibility of using and remixing current policies (delightfully referred to as the “open source way”) for the lightest lift in getting a viable policy in place.

There’s an important lesson here: Although the temptation to use previous legislation as a template is high (laws are after all determined on precedent, highly iterative, and are perhaps themselves the very first instance of the “open source way”) it is actually more helpful to discuss what benefits you see in open data policies that exist currently, what you like best about them, and to share resources that exist in terms of guidance when starting to develop policy. Fortunately, this is the kind of dialogue unconferences were made for. If you find yourself in a similar situation, discussing policy creation in an unconference, brigade meeting, or hackathon-type setting, let the conversation get started and turn the enthusiasm of the room into a strategy session to discuss how participants can form working groups or reach out to government constituents to draw in open data policy bill sponsors.

Ultimately, partnerships between government and transparency activists to work together on drafting policy are what created the open data policy policies and legislation out there today. The Transparency Working Group of New York City was imperative in the creation of NYC’s open data policy Local Law 11 of 2012, working together inclusively, complete with a policy hackathon and open data priorities wiki. Star players and organizers can come in many forms — so be sure to not count out any of the stakeholders that attend your unconference. In Hawaii, local technology groups and journalists have been key to the in-progress open data policy. In Utah, it was Jason Williams, a citizen-activist and local journalist, who organized the interest in the state’s recently passed open data law. In Montgomery County, the main driver was Councilmember Hans Riemer and associates, and in New Hampshire, a legislator with a background in tech helped rally execution of their open data policy. At CityCampNC, the open data policy seession attendees used these examples and their own experience to begin identifying relevant stakeholders to reach out, including the IT committees (in both houses), a local League of Municipalities, county delegation members, local representatives, the real estate industry, and North Carolina Press.

While comparing the legislative language out there and drafting policy are excellent thought exercises, the real value in the policy unconference session isn’t to draft a legislation template then and there, but to begin the steps in engaging in the legislative process discussing how to partner with your local lawmakers and relevant stakeholders to eventually come to a consensus together.

As Sunlight revamps its Open Data Policy Guidelines this summer (SPOILER: with more local examples!) and continues its municipal transparency research (see our Guidelines to Open Data Policy Guidelines blogpost series), we hope to provide additional guidance both about how you can connect with your local government and what partnerships and processes have led to successful open data policy making. If you’re curious in following open data policy bills currently in process, check out Sunlight’s Open States and Scout for alerts. To look at local policies that have already been drafted and how they stack up against our Open Data Guidelines check out our ongoing research here. Lastly, importantly, you can reach us at local [at] sunlightfoundation.com for additional open data policy session or drafting feedback.