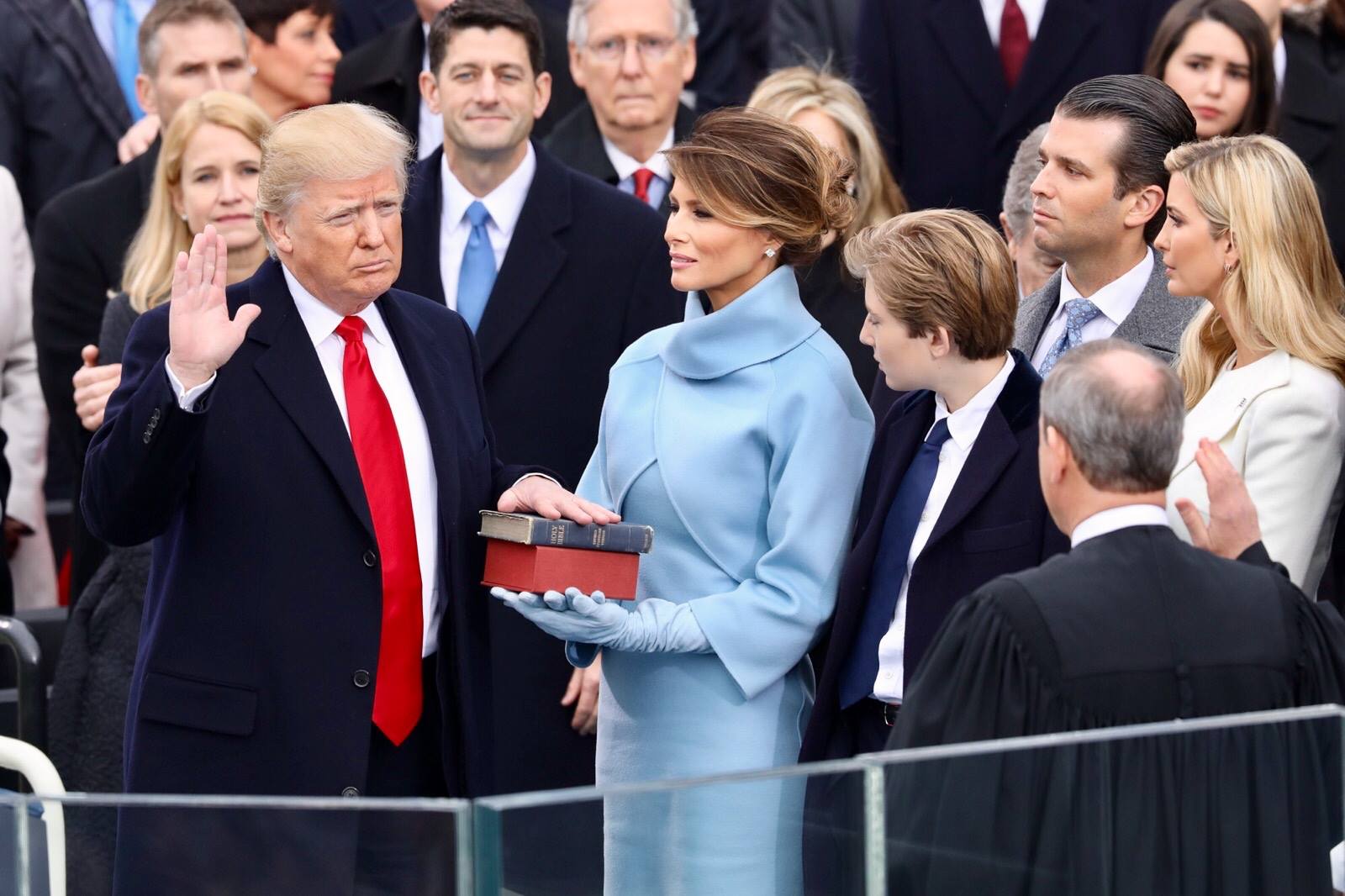 Chief Justice John Roberts administers the oath of office to Donald Trump as his family looks on. (Image Credit: Wikipedia)

For more than a year, Sunlight Foundation has been tracking President Donald J. Trump’s known business dealings and personal interests that could conflict with his duties as President of the United States.

So far, we have identified more than 1,000 potential conflicts of interest for the First Family, with over 600 connected to the president himself. Everything we have compiled can be found in our open database.

Sunlight Foundation is not the only group examining Trump and the First Family’s global conflicts of interests. Journalists, researchers, government ethics advocates and others are building a common Web of accountability for Trumpian conflicts. To highlight what is being uncovered, Sunlight Foundation will be publishing a weekly round-up of content focusing on the issue. The links will range from news stories and opinion articles to research reports.

This is our first edition. Please read, learn and let us know what we missed at conflicts@sunlightfoundation.com. 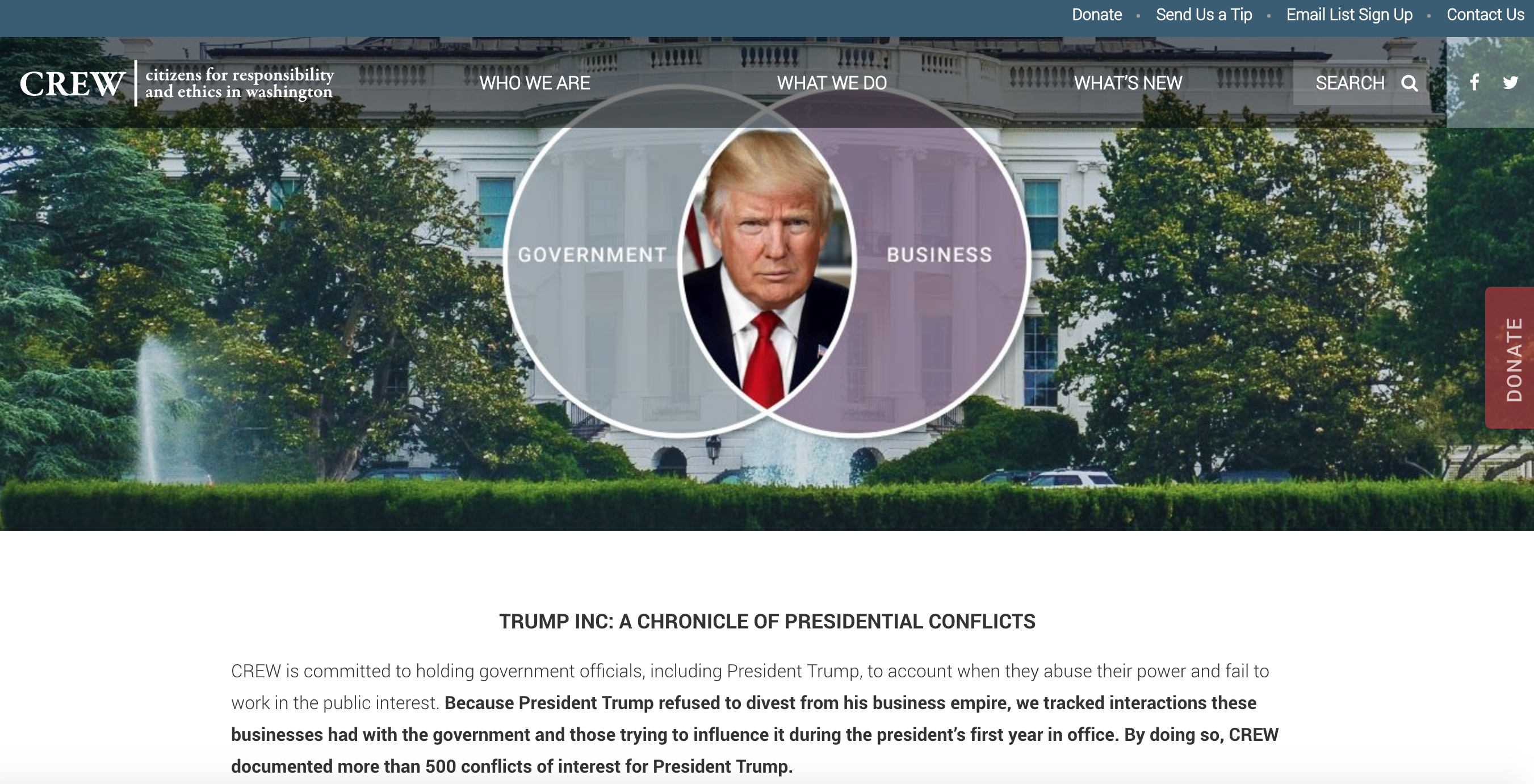 The Citizens for Responsibility and Ethics in Washington (CREW), a nonprofit legal watchdog group based in Washington, D.C., published “Profiting From The Presidency” in late January, documenting a year’s worth of over 500 instances of conflicts.

The report is based on what CREW’s researchers found while tracking the interaction between the Trump administration and the Trump Organization. Their findings include:

CREW has created an interactive timeline of what they found. Choosing “Mar-a-Lago” as a filter choice will result in an afternoon’s worth of reading. 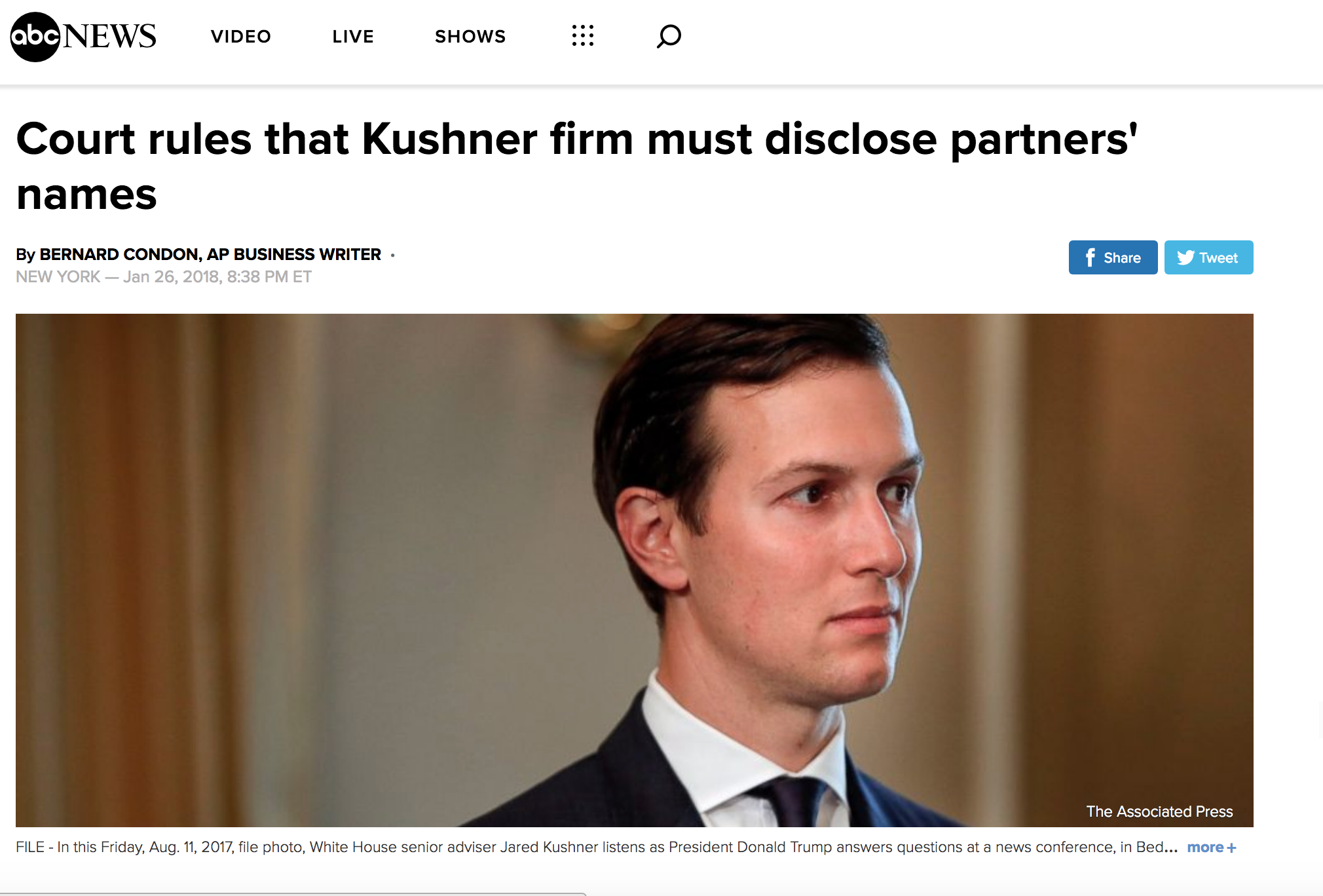 The ruling came after the Associated Press and other news organizations sued for access to the information. As a result, Kushner Cos. may be forced to reveal the identity of its business partners in several Maryland properties. 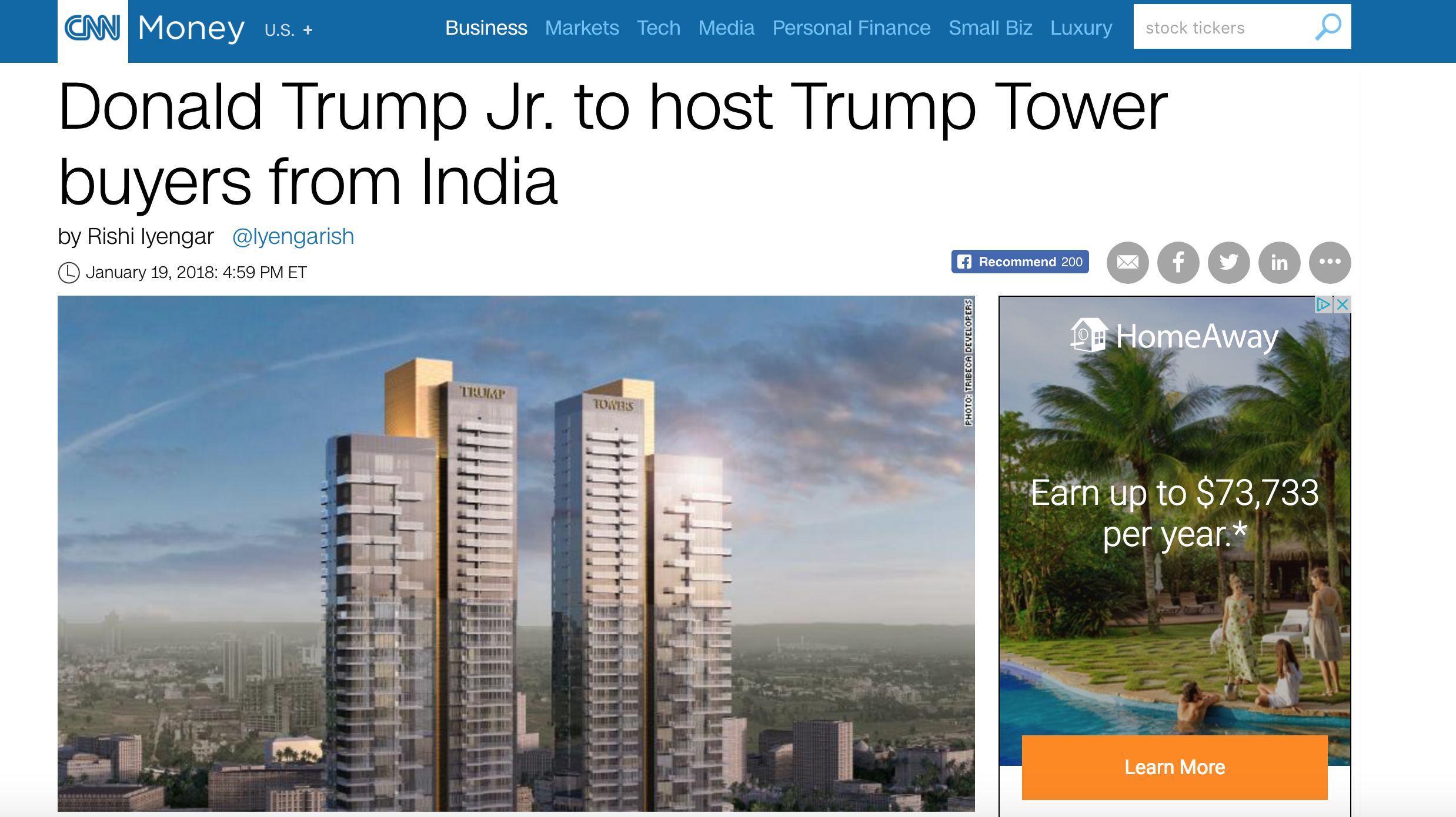 Moving from Trump’s son-in-law to the president’s son, CNN reported that Donald Trump Jr. will meet a “initial few buyers” from  the new Trump Towers apartments under construction outside of New Delhi in Gurgaon, India. People who  buy an apartment will have an opportunity to meet with Trump Jr. in New York, at a reception.

“It’s generally a feel-good factor — you’re meeting the promoter, understanding what is the design behind the project, what is their vision for the project,” Pankaj Bansal, director of real estate firm M3M India, told CNNMoney. 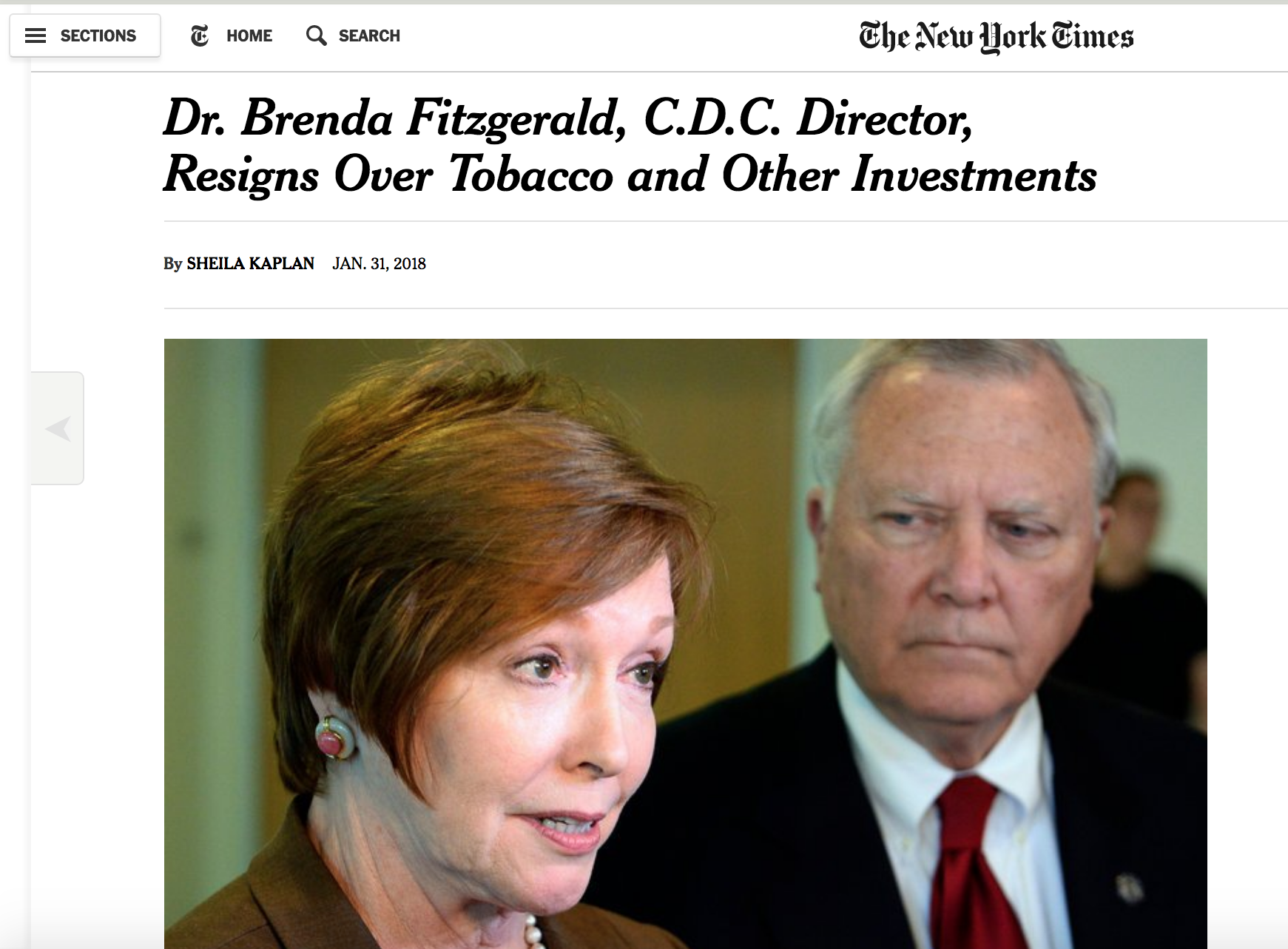 Probably the biggest conflicts of interest news to emerge this week was the resignation of the director of the Center for Disease Control and Prevention (CDC0 Dr. Brenda Fitzgerald.

Her resignation came a day after Politico reported she bought shares in a tobacco company a month into her appointment to lead the CDC. Yes, the very agency that works to reduce tobacco use.

Dr. Anne Schuchat, a veteran with the CDC, was named acting director.

If you see these headlines and stories and wonder what you can do about it, Dan Weiner, senior counsel of the Democracy Program at the Brennan Center for Justice at New York University’s School of Law, made some suggestions about Trump’s scandalous conflicts of interest.

Sunlight’s “Tracking Trump’s Conflicts of Interest” project presents a comprehensive, free, searchable database detailing all of President Donald J.Trump’s known business dealings and personal interests that may conflict with his public duties as president of the United States. Read our reporting to stay current on related news, learn more about conflicts of interest at every level of government and search our database. If you’re familiar with any of the conflicts we’re tracking you can email us or contact us here to contribute to the project.

Lynn Walsh is an Emmy award-winning freelance journalist who has worked in investigative, data and TV journalism. She produces content focused on government accountability, public access to information and freedom of expression issues. She’s also helping to rebuild trust between newsrooms and the public through the Trusting News project.