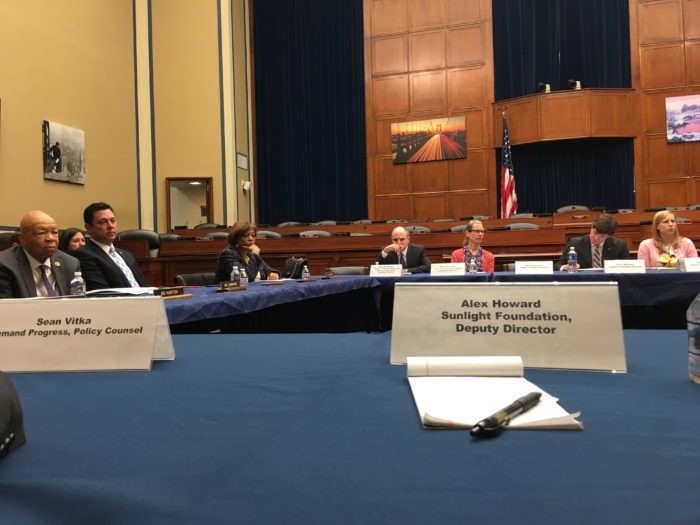 This week, the Sunlight Foundation joined a roundtable of nonprofits, Members of the U.S. House of Representatives, and their staff in Congress to discuss ethics and open government.

Sunlight has spoken out repeatedly on these issues in recent months, calling for the House Oversight Committee to do oversight, not threaten the Office of Government Ethics (OGE) and the presidential candidates to adopt ethical code of conduct prior to the election, as well as advocating for President Donald Trump to address his global conflicts of interest by disclosing and divesting.

We were honored to be invited to share our views and hear from the Committee and other open government advocates on Tuesday. We were pleased to hear Chairman Jason Chaffetz and Ranking Member Elijah Cummings agree that the Office of Government should be fully funded, staffed and reauthorized. The House Oversight Committee has asked for specific recommendations to improve the OGE. We intend to do exactly that in the near future.

Following is a summary of what Sunlight told the roundtable on Tuesday.

First, we spoke about the chilling effects that comments by White House chief of staff Reince Priebus and the letter from the committee have on OGE specifically and federal civil servants in general, as documented in our list of agencies secretly directed not communicate with the public. Part of OGE’s mission is to inform the public about ethics, a matter of considerable public concern, given the number of billionaires nominated to lead agencies and the president’s conflicts of interest. We also opposed the Trump administration’s is attacks on the American free press, including repeated public attempts to delegitimize the New York Times and other publishers and media outlets as “fake news.”

Second, we said that President Trump’s recent executive order on ethics was a step backwards for open government, as it removed a mechanism requiring ethics waivers to be publicly disclosed and published online and allowed former executive branch officials to lobby the agencies they served in.

Third, we highlighted how the Trump administration’s initial approach to WhiteHouse.gov has not only failed to provide information about government staff, operations or policy, but lagged in disclosing executive actions to the public and affected government agencies when the president signs them, leading to misreporting and confusion, as the world saw this past weekend.

Finally, we brought up how President Trump’s decision to break four decades of democratic norms by refusing to disclose his tax returns set a diminished tone on ethics from the top of the federal government. We noted that without full disclosure, neither the public nor Congress will know whether the president has addressed his known conflicts or if hidden foreign entanglements have followed him into the White House. As a remedy, we recommended what we advocated for since May 2016: Congress should mandate tax return disclosure for presidential candidates.

What the American public sees today in the Trump administration is the appearance of corruption created by the failure of President Trump to address the unprecedented conflicts of interest with which he entered the White House. We urged the House Oversight Committee to take preventative actions to ensure that the public does not see the reality of corruption in our federal government tomorrow.