Whether you’re steeped in the open government world (as we at Sunlight are) or are not yet familiar with capital-O capital-D Open Data policies, there are two key elements you’ll see taking a bird’s eye view at open data policies in the U.S.: They’re new and they’re gaining momentum.

Although the Freedom of Information Act has been around since 1966, policies governing disclosure of information under the “open data” heading as we know it have only been in existence for the last 7ish years (since about 2006). In that time, though many of the bigger cities in the United States today (Chicago, Philadelphia, New York City, San Francisco) have enacted policies on this issue. “Open data” likely never made it into the discussions at dinner tables around the country — but that may soon change.

But where do you go to keep track of all this growth? 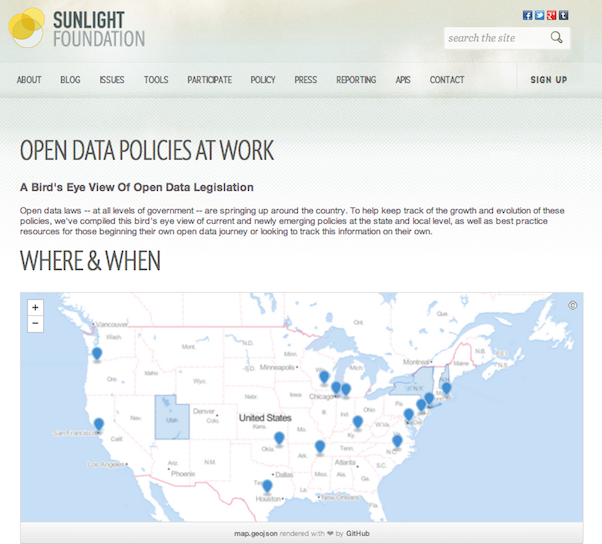 As open data policies continue to increase and iterate, we found ourselves longing for a one-stop page to learn about policies of the past and policies of the future — something useful for our work and something we wanted to have exist in the world so we could explain to our family and non-opengov friends that yes, this open data movement is a thing and it’s growing.

So, in an effort to share our work and pool our resources, we created www.sunlightfoundation.com/policy/opendatamap. On our new page, you can plumb the short history of everything loosely discernible as an “open data policy,” from the 2006 D.C. administrative memo to the latest policy enacted  (in South Bend, IN on 8/22/2013). Follow our Open Data Map to find out about forthcoming open data policies (at the date of this post that includes: (cities) Cambridge, MA and Oakland, CA; (states) Illinois, Honolulu, and Nebraska) and use Sunlight tools (such as Open States and Scout) to help you track upcoming open data laws on your own. We’ll continue to cover these policies on the Sunlight Foundation blog, but invite you to help us grow this resource. Know of an open data policy we missed? Get in touch: local@sunlightfoundation.com

And as always, peruse our Open Data Guidelines and Comparison of Open Data Policies for updated best practice sample language as policies pass.